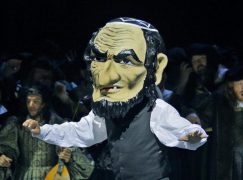 Berlin gets to grips with ‘Richard Wagner’s Jewish Nightmare’

The Deutsches Historisches Museum on Unter den Linden is rolling out an exhibition on the central importance of Richard Wagner to the meaning of being German.

The exhibition, titled ‘Richard Wagner and the Nationalization of Feeling’ (8 April to 11 September) covers four key aspects of Wagner’s contribution: Alienation and Belonging, Eros and Loathing.

Original objects such as the poem dedicated to Reich Chancellor Otto von Bismarck “To the German Army” (1871) illustrate how the specifically “German” aspect became a trademark of his works and how staged, communally experienced feelings of “folk” and “nation” became the benchmark. The different versions of his inflammatory essay “Judaism in Music” from the years 1850 and 1869 show that Wagner’s pronounced anti-Semitism and his nationalism grew inseparably hand in hand.

In his installation “Richard’s Jewish Nightmare”, created specially for the exhibition, theatre director Barry Kosky leads museum guests into a Black Box. There in total darkness they experience a sound collage that mixes Wagner quotes about the Jewish way of speaking, translated into Yiddish, with passages from the overblown portraits of the anti-Semitic figures Alberich and Mime from “The Ring of the Nibelung” as well as with synagogal chants.