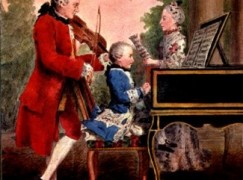 A retired professor in Darwin, Australia, claims he has proof that Mozart stole music from his sister Nannerl in two of his violin concertos.

The former conductor of the Darwin Symphony Orchestra told the national broadcaster ABC that the handwriting is quite different on two concertos out of the five.

Less excitable voices suggest that Nannerl might have copied out the scores for her brother.

There is no other surviving evidence that she was capable of composing at this level.

« Mourning for a maker of American opera, 91