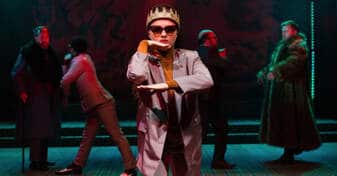 Ever wonder why the same plays by Shakespeare are produced over and over again – Macbeth, Romeo and Juliet, Hamlet, King Lear, Merchant of Venice, Much Ado About Nothing, and the others you know well? Without thinking about it, name as many Shakespeare plays as you can. The First Folio has 36, and there are a couple of dodgy ones that he may or may not have had a hand in, but how many can you think of off the top of your head? If you can get to 10 without pausing, you’re a real theatregoer. What happened to the others? I can tell you but it will sound like lèse majesté – they’re just not that good.

One of these is King John. I waded through the new production by the RSC this week, realising that I’d never seen it before. It turns out that King John never made much sense even in Shakespeare’s time when the source material he used was patchy and suspect. It was probably written in the mid-1590s, although it did not appear in print until the First Folio of 1623. That text is thought to have come from a 1596 manuscript subsequently copied by scribes in 1609 and 1623. This may explain some of the play’s textual problems. My own theory, not borne out by scholars who know far more than I, is that it was an early failure that Shakespeare had shoved on a shelf, and then pulled out to be rewritten and hastily knitted together in time for a rehearsal when he was late on a deadline.

It makes even less sense when produced, as here, in keeping with current trends, with a female King John, a female Papal Legate, and set in the Swinging Sixties. Lots of bopping and mad dancing and lots of blood, but very little actual dramatic reason.

Here are the bare bones: Richard the Lionheart is dead. His brother John is King of England. Threatened from all sides by Europe, the English noblemen and even his own family, King John will stop at nothing to keep hold of his crown.

Shakespeare’s rarely performed tale of a nation in turmoil is determinedly modern in both dress and intentional contemporary resonance and stars Rosie Sheehy doing her best as King John, David Birrell as the King of France and Katherine Pearce  as Cardinal Pandulph.

Ah well, back to Hamlet. At least we know how that one goes.