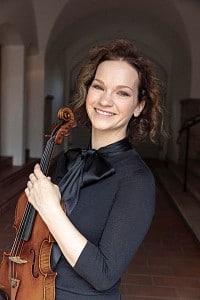 What it takes to sell out the Royal Festival Hall

Much of the audience that packed the Royal Festival Hall on Sunday, 7 November, was drawn particularly by a single star, the American violinist Hilary Hahn. She was featured in the first and third of the programme’s four items – Vaughan Williams’s beloved English idyll The Lark Ascending (1914, in his 1921 orchestral version) and the Russian dreamscape of Prokofiev’s first violin concerto (1917). By way of encores, she also added two contrasting Bach items.

She was in wonderfully Protean form. Here, especially in The Lark Ascending, she seemed wrapped in inward thought, hovering and soaring in the empyrean as if free of gravity and pulse – but there, notably in certain passages of the concerto, she openly addressed the audience. In the Prokofiev, she was often propulsive, driving the music urgently – sometimes herself seeming driven, and at moments showing the rougher edge of her bow, adding touches of friction. She plucked one pizzicato note as if stuffing it with honey; yet she often played as if murmuring on the cusp of silence. Some melodic lines felt softly spectral.

Vaughan Williams, who used to seem too English Home Counties for comfort, is ageing well. The philosophical qualities in his music have become all the more apparent. In The Lark Ascending, he depicts the bird’s song, its flight, and much more: a sense of lyrically tranquil oneness with the natural world, transcendent fligbts of the singing soul, the union of movement and stillness. Hahn’s playing is endlessly expressive: she spins out threads of tone like gossamer, with subtle inflections of vibrato like heartbeats.

Her playing of the Prokofiev showed her wonderfully unpredictable a voyage this work describes. It’s well known that he here inverts the fast/show/fast structure of traditional concerto form – but the new slow/fast/slow arc he provides here is just the first layer of a work that abounds with suspense and surprise. It’s as if he had a secret scenario, with the violin as the protagonist of a fast-changing novel of magic realism. Certainly, Hahn makes this music contain more worlds than one; certainly, she made it a tale of visionary adventure.

She was not the only eminent woman. The conductor, from Hong Kong, was Elim Chan. The composer of the programme’s second work (Tumblebird Contrails, 2014) was Gabriella Smith, an American. This was (to date) the longest and most diverse of the Philharmonia’s current Human/Nature season, with music from three centuries and four countries. Chan found a completely distinctive and separate style for each.

The highly imaginative style of Tumblebird Contrails lies in its spectrum of sonorities. Violins quietly scrape around in their upper register, repetititously, insistently, like faraway bird colonies. Brass instruments slur and slide slowly from note to note, like changes on the horizon or (later) like seals calling. Wind notes are sustained at length as if hung in the air. The tension between metre and no metre suggests a scenic world where time is and is not an issue. This is marvellously poetic music, even picturesque.

After the interval, Chan conducted Brahms’s Second Symphony (1877) with a very fine blend of classicism and Romanticism, beautifully balancing its changing components of harmony, rhythm, and melody, keeping the music’s inner thought in forward progress. There are sequences in which it’s beautiful to watch the quivering bounce of her baton’s small-scale beat; but she’s also often full-bodied in guiding the music’s current and thrust. This symphony is included in this Human/Nature season because it’s been labeled Brahms’s “Pastoral”, but it didn’t sound pastoral on this occasion. As the third movement, for example, seemed to turn from a minuet into a waltz, it became a study in alchemy.

It’s worth recording that, when Hahn was given a bouquet after the Prokofiev, she gave one rose to Chan and another to the orchestra’s leader. When Chan was applauded after the Brahms, her manner, so focused and intense during the music, became exceptionally humble. Musicians often speak of serving the composer and the score, but conductors usually show who’s in charge. Chan’s modesty and courtesy suggest, most touchingly, that service is her mission.

SEE ALSO: Getting back into concertgoing

Getting back into concert going »