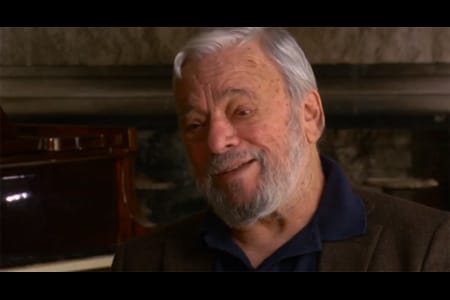 The first thought that came to mind when I heard of Stephen Sondheim’s death was how open and friendly he always was.

Although private in many ways and meticulous about the detail of putting his work on stage, he gave freely and frequently of his time if the purpose and the person were serious. I had three meaningful engagements with him, and I wish the BBC will restore our Lebrecht Interview to circulation.

Meantime, here is my write-up of one of our conversations. 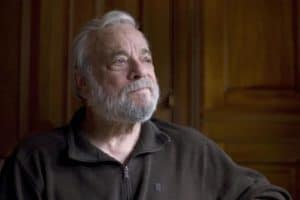 When Stephen Sondheim went to congratulate the cast of Covent Garden’s beautifully-sung Sweeney Todd last winter, the magnificent Sir Thomas Allen murmured in his ear that the name part had ‘sat a little low on my voice.’
‘Why didn’t you say something?’ exclaimed Sondheim. ‘I’d have raised it half a tone.’ Opera baritone and show composer eyed one another incomprehendingly. For Allen notes in a score are holy writ, for Sondheim they are a means to an end. ‘I write for performance,’ he specifies, ‘rather than for the voice.’

Those who keep their culture in tidy boxes have a problem with Sondheim. For 47 years, ever since he jetted to attention at 27 as lyricist of West Side Story, Sondheim has walked both sides of the track and straight down the middle. He plays in commercial theatres and state opera houses, in am-dram and at the Kennedy Center. All his life he has defied categorisation as high art or low, common entertainer or lofty public edifier. ‘When I was in my teens,’ he told me last week, ‘I wanted to be on Broadway. Once I was there I just wanted to write shows.’

That is as close as he will come to a quo vadis but that, as so much else in Sondheim, is simplicity designed to deceive. He has never had a long run on Broadway, nothing in the same league as The Producers, whose author Mel Brooks is his ardent fan. Sondheim musicals tend to open off Broadway and close soon after, the shortest (Anyone can Whistle) within a week. Assassins, a revival of his rocky 1991 essay on US history, won five Tonys and is shutting this weekend after barely three months, its meditations on the role of violence in the American dream jarring post-9/11 nerves.

He sounds sanguine about reversals, but when I quote him a friend’s opinion that ‘all Steve ever wanted is a Broadway hit,’ his voice on the phone turns dry and crackles with denial. ‘The one thing that’s nice about Broadway and the West End,’ he finally admits, ‘is you get to see a broader audience.’

He should have been in London this week for the National Theatre’s staging of A Funny Thing Happened on the Way to the Forum, the first show he ever wrote and composed entirely himself, to an original idea by Plautus (251-184 BC). The reviews, not unusually, ranged from delirious to indifferent. Another classical adaptation, meanwhile, detained him in New York.

The Frogs, after Aristophenes, is about to open at the Lincoln Center. Assembled in 1974 to inaugurate a swimming pool at the Yale Drama School, Sondheim contributed five or six numbers to a chaotic event in a reverberant, puddled gym. He has now expanded the idea into a two and a half hour musical, co-written with The Producers star Nathan Lane and directed by the choreographer, Susan Stroman. ‘We’re still doing changes and cuts,’ he explains. ‘Nathan is both writing and acting, Susan is doing dance and direction, so they had their hands full and they needed me around.’ (Stroman, it appears, objected to a proposed reading of The Frogs on the National stage, demanding exclusivity for New York.)

At 74, Sondheim remains available to his work, ever ready to amend and develop. As a result no two revivals are likely to sound the same. The small-bore Sweeney Todd at Trafalgar Square at the end of the month will be worlds apart from the full-orchestra Royal Opera House production, yet both are true to concept, as are many fringe and amateur stagings; there are 17 Sweeneys this summer across the UK and North America. For a man without a Broadway blockbuster or a pop-chart song, Sondheim has unrivalled diversity to his appeal.

A typical audience will contain kids and grans, scholars and Sun-readers, theatre types and three-piece suits. There will be a knot of gay men who read Sondheim to their own subtext, and a thicket of students, eager to learn about relationships. Unlike most dramatists of his age, he does not need to worry about renewal, yet it preys on his mind.

Early this year he presented Bounce in Chicago and Washington, his first new musical for a decade. The title was a misnomer for Bounce, a tale of two gold-rush brothers in the vaudeville era, lacked any kind of comeback. ‘We, (the writer) John Weidman and I, really liked it,’ he says. ‘The critics were tepid. That makes it difficult to respond. So we thought we’d let it lie for a few months and then look at it. We’re aware there is a structural problem. We’re deciding what to do with it.’

His candid acceptance of failure is revealing. In the past he has accused critics of ‘hating’ him. Now, he acknowledges a debt to reviewers for helping him find holes in a piece and mend them. There is a modest practicality to his approach, a grace of humility seldom found in classical composers – but then Sondheim is adamant he is not one of them.

The only son of divorced, well-heeled parents, he grew up in the household of his best schoolfriend, Jimmy Hammerstein and came to idolise his father. ‘I wrote for the theatre,’ he later said, ‘in order to be like Oscar. I have no doubt that if he had been a geologist, I would have become a geologist.’

Hammerstein showed him how to write a tight lyric. His other teacher was Milton Babbitt, the crabbiest, most ascetic atonalist in America. ‘Babbitt taught me what long-line composition is about,’ he reflects, ‘how to organise music over a span of time. It has to be the musical equivalent of a plot in a play.’

Knocking around Broadway he got looped by the playwright Arthur Laurents into the team of West Side Story, which golden-boy Leonard Bernstein was trying to put on before he took over as music director of the New York Philharmonic. Sondheim – shy, adroit, faintly mystical – turned workaday rhymes into the emotional typhoon of ‘Maria’ and the wise-cracking, knuckle-snapping ‘America’.

Engaged in wordplay, he discovered that The Listener, the BBC’s journal of arts and ideas, had the toughest crossword. ‘The Listener was published Wednesday and would reach the US on Thursday,’ he recalls. ‘I’d grab a copy on my way to work on West Side Story, and I got Leonard Bernstein hooked. Thursday afternoons no work got done on West Side Story. We were doing the puzzle.’

He has now given up crosswords, he insists – ‘I’m an addictive personality: if I started to do puzzles again it would take up all my time’ – but when the subject came up some weeks ago in a chat with Simon Russell Beale, the English actor, the two men became friends on four-up, two-down. ‘Puzzles are good for a composer,’ prescribes Sondheim. ‘It’s what we do, make things fit.’

What kind of composer he is may have to remain unclassifiable. He is too clever and uncatchy to be pop, too supple, too witty and stagewise to be opera. ‘I think of acting before I think of singing,’ he confirms.

Yet no composer crosses so many genres, or reaches so multifarious a public. Genre, says Sondheim, is out of his control. ‘I believe an opera is something that is shown in an opera house in front of an opera audience. The same work, in the West End or on Broadway, is a West End show. It’s a question of expectation. Does that make Sweeney an opera? I dunno. It’s for you guys to decide.’

« Watch here: The opera about a man that Putin had murdered