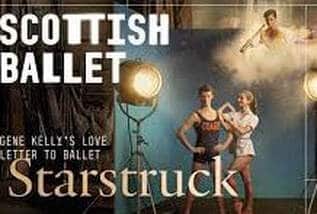 In 1960 Gene Kelly (yes, that Gene Kelly) was invited to create an original work for the Paris Opera Ballet. His jazzy, joyful Pas de Dieux was highly acclaimed at the time but has been rarely performed since. It has now been given a new set of wings by Scottish Ballet’s Artistic Director Christopher Hampson and retitled Starstruck.

Escape to the glamour and grace of Paris with this feature film by Hampson with Tony Award-winning designer Lez Brotherston, and film director Oscar Sansom. It combines live performance from Scottish Ballet’s stage production with cinematic sequences inspired by the golden age of Hollywood.The ballet is set to Gershwin’s Concerto in F, with help from Chopin.

Gene Kelly’s pioneering choreography and distinctive style influenced a generation of directors and dance-makers in Hollywood, Broadway and beyond.
​
Starstruck is only available to watch between 26 November – 5 December 2021. Once started, viewers will have 48 hours to complete and re-watch the film again within the viewing window.

« Opera of the Week: Janáček’s Destiny on Saturday night live