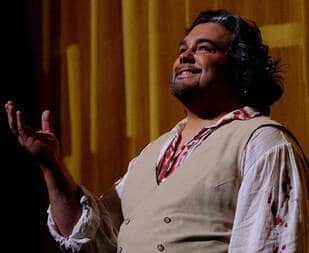 There’s something special about La Scala. Even more than Covent Garden, more than the Met, La Scala epitomises  Italian opera, and as wonderful as the technology at the Met can be, the musicality of the shooting and editing at La Scala leaves it behind emotionally, if not technically. My idea of heaven is an evening of Cav and Pag at La Scala and here it is in all its glory. All right, you’re not actually in Milan, fighting the traffic and arguing with the policeman about where you can park, but that has its advantages too.

There’s a reason Leoncavallo’s Pagliacci and Mascagni’s Cavalleria Rusticana are among the world’s most popular operas. I don’t need to tell you what it is. Just watch these two short operas and you’ll see it for yourself.

Pagliacci and Cavalleria Rusticana, while musically and stylistically different, both depict the tragic consequences of romantic jealousy run amok. This deeply moving, albeit rather dark, production of the  traditional double-bill – known affectionately as Cav and Pag – are, when performed together, as is usually the case – both moving and dramatically satisfying. Dismissed as ‘war-horses’ by those who have seen them too often, they are in fact carefully crafted and much loved musical theatre which allow plenty of scope for directors and singers to shape them to their own purpose and talent.

The audience is rarely aware of the genesis of a composer’s idea but in the case of Pagliacci we know where the idea for the plot came from. Ruggiero Leoncavallo was the son of a magistrate. And when he was about ten years old his father was hearing a case of an actor, a clown, who was part of a troupe who killed his unfaithful wife after a performance.

On this occasion stage director Mario Martone teamed up with set designer Sergio Tramonti and costume designer Ursula Patzak for an unconventional reading of the two pieces, with an outstanding contribution also from lighting designer Pasquale Mari. The late, great tenor Salvatore Licitra, in one of his last roles (he had died in a motor scooter crash earlier that year, aged only 43) shines as the soldier Turiddu in Cavalleria, and the reliably brilliant José Cura brings heartbreaking pathos to Canio, the tragic clown, here teamed with the Oksana Dyka’s Nedda in Pagliacci. The conductor is Daniel Harding.
​
Join me at Milan’s Teatro alla Scala – I bet you’ll be applauding even after “the comedy is over”.

« Roger Norrington: I am not that interesting