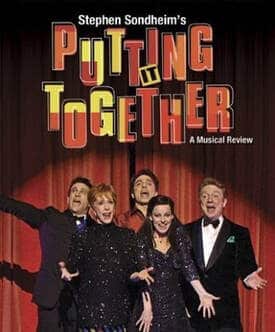 Putting It Together – Sondheim Review
Click here for tickets

​This is a musical revue showcasing the songs of Stephen Sondheim. Drawing its title from a song in Sunday in the Park with George, it was devised by Sondheim and Julia McKenzie. There have been a number of productions, beginning with its premiere in England in 1992, Broadway in 1999 and the West End in 2014.

This is the Broadway production which originated at the Mark Taper Forum in Los Angeles and transferred to Broadway the following year, opening in November 1999 at the Ethel Barrymore Theatre, where it ran for 123 performances, including previews.   This production is directed by Eric D. Schaeffer and choreographed by Bob Avian. The video was directed by Don Roy King.
​
The Broadway cast stars Carol Burnett, George Hearn,  Ruthie Henshall, John Barrowman, and Bronson Pinchot.  The production marked the return of Burnett to the Broadway stage for the first time since her success in Moon Over Buffalo in 1995. Hearn was nominated for the Tony Award for Best Actor in a Musical.

While the rest of the cast are strong, of course, the reason to watch this show is the great Carol Burnett who finds her own route through each of her songs and tells us a story with each one. Unless, of course, you’re not a Sondheim fan in which case there’s no hope for you.

How to make a miracle in Mozart »