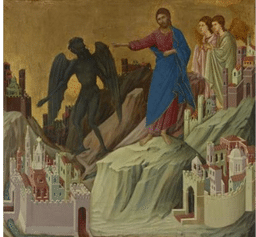 Ruth Leon recommends…Frick – Where in the World – Gold

Frick – Where in the World – Gold with Duccio
Click here to watch
Many of us have really missed the Frick Museum’s wonderful weekly series ‘Cocktails With a Curator’, which they discontinued once the Museum opened to the public again after the pandemic. They have a new series, not nearly as personal or evocative but better than not seeing them at all. In this episode of “Where in the World?,” Curator Aimee Ng discusses the use of gold in a rare painting by Duccio.

Signifying both a sacred realm and material riches, the precious metal has a history intertwined with trade, conquest, and colonization in West Africa and beyond. The Frick’s temporary move to Frick Madison has prompted new ways of looking at their works of art. The reframing of the collection sheds light on the fact that the Frick’s art, although predominantly European, is undeniably linked to the world beyond Europe. In this series, Where in the World?, they’re exploring some of these stories, asking “where in the world” we can find new connections to familiar objects.

« An original pianist is 60 today