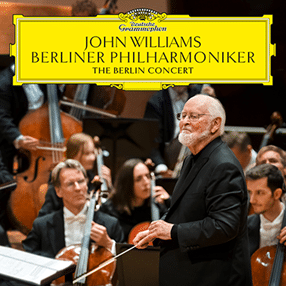 The Hollywood composer made his classical record debut with the Vienna Philharmonic and Anne-Sophie Mutter.

Now Berlin have got in on the act.

John Williams – The Berlin Concert, captured live by Deutsche Grammophon during a series of sold-out concerts, presents some of the world’s best-known film music performed by one of the world’s greatest orchestras. The DG album is set for release on 4 February 2022, in time for the renowned composer’s 90th birthday just four days later. “John Williams doesn’t need the films, the films need him,” wrote Rolling Stone after the concert, while Berlin’s Der Tagesspiegel summed up the event as simply “one of those great evenings”. Fans can catch a sneak preview of the concert on 2 January 2022, when it will be streamed in full on DG Stage.

« ‘One of the most outrageous and corrupted competitions’

What an opera director said to get fired »