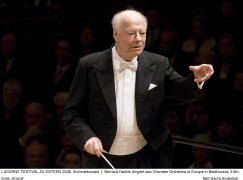 We have been informed in the past hour that the conductor Bernard Haitink died peacefully at home today at the age of 92. His wife and family were with him.

Haitink was the last of the great record conductors with more than 450 releases to his credit.

He was chief conductor of the Concertgebouw Orchestra for 27 years, also leading the London Philharmonic, Glyndebourne, the Royal Opera House, Staatskapelle Dresden and Chicago Symphony Orchestra.

An assiduous man with an exceptional ear, he raised every ensemble that he headed to the highest world standard. Although he retired in frail health two years ago he continued to attend concerts to the last and was delighted to surprise some Concertgebouw musicians when they appeared this month at the Wigmore Hall.

He could be tart but was never unkind. To watch him with a youth orchestra was an object lesson in the transmission of knowledge, purpose and morality. I learned much of what I know about conducting watching him in concert from the choir seats of the Royal Festival Hall.

Bernard will be missed the world over. 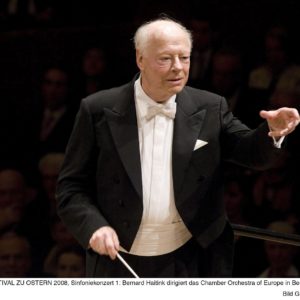