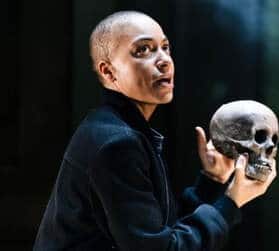 OK. A Black, female Hamlet at The Young Vic. Why not? The highly-anticipated production of Shakespeare’s great tragedy, with  Cush Jumbo (The Good Wife, The Good Fight) making her Young Vic debut as a new kind of Hamlet.  Cush Jumbo reunites with her long-time collaborator, director  Greg  Hersov, to bring us this tale of power, politics and desire. At least, that’s how it’s described by the Young Vic. Personally, after a lifetime of seeing many, many productions of Hamlet, I don’t think it’s about any of those. Watch and decide for yourself.

Four livestream performances of this in-person production of Hamlet, starring Cush Jumbo in the title role with Adrian Dunbar as Claudius. The Young Vic is trying a fascinating experiment with this production. You can either watch a traditional video capture of the stage action (called the Director’s Cut) or you can choose, moment to moment which camera you want to watch. This is called ‘The best seat in your house’ or the Director’s Chair, and you can choose which version to watch, when you book.
It’s live, not on demand, in British Summer Time, so be sure you check the time in your timezone.

Why Yuja Wang can’t have it both ways »