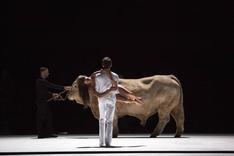 Covent Garden is weeding out operas for racism

The Royal Opera House has announced that it will review its repertoire to take account of ‘cultural sensitivities’.

It said in a statement: Our repertory contains a raft of work both contemporary and historical. To ensure we present these stories in a way that is suitable and enjoyable for modern audiences, both our artistic companies consult widely to ensure that the Royal Opera House takes account of all cultural sensitivities in its staging, casting and presentation of much-loved historic works.

So Carmen won’t be a Roma, Otello is colour-neutral, Don Giovanni is a chaste mentor to young women and Peter Grimes is just … nice.

That live stage prop is also not full of it.

« France Musique is hit by strike