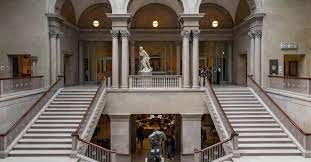 Another tale of our times:

The Art Institute of Chicago (AIC), one of the world’s top art museums, had 122 volunteer ‘docents’.

They served as guides to the museum’s 300,000 works. They have two weekly training sessions for 18 months, and ‘five years of continual research and writing to meet the criteria of 13 museum content areas’. Most of the docents are middle-class retired women, generally white. Fifteen years is their average term of service.

Last month, the Art Institute sacked the lot. The reason? They are insufficiently diverse.

They will be replaced by paid (=low-paid), poorly trained minority personnel.

Here’s a shaming editorial from the Trib:

…A weaselly letter was sent out Sept. 3 by Veronica Stein, the Woman’s Board executive director of learning and engagement at the Art Institute of Chicago. The recipients were the museum’s 150 or so volunteer docents, a beloved mainstay of the venerable cultural institution for decades and the main providers of fine, learned tours to Chicagoans, tourists, students from Chicago Public Schools and myriad other visitors to our great museum.

Once you cut through the blather, the letter basically said the museum had looked critically at its corps of docents, a group dominated by mostly (but not entirely) white, retired women with some time to spare, and found them wanting as a demographic.

No matter that the docents had typically trained for years, if not decades, on how to describe the Art Institute’s collection, or worked hard on adjusting to the trendy new ways (”Art and Activism”) of describing the work to be found there, or put in hour after hour in academic study of their fields.

Thus the museum had decided to can the whole lot of them, replacing the group with a small number of paid educators working longer hours.

Don’t forget to pick up your things, it said, among other pleasantries. Feel free to meet on your own, it allowed, although we won’t be able to support you. And would you like a free membership? Initially, the museum even put an expiration date on that, before backing down after the docents expressed their deep sadness at such shabby treatment after all their years of service…..

Frankly, the museum would certainly have had a tough lawsuit on its hands for age and race discrimination (there were laws against that, last time we checked) were it not for one thing: Everyone being nixed was a volunteer. And, as at least one docent found out after contacting the AARP, volunteers are not covered by federal employment laws. We’ll wager museum lawyers had pointed that out.

« Why Daniil Trifonov thinks Munich’s new hall is the best