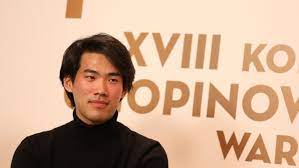 A Canadian wins the Chopin

The Canadian pianist Bruce Liu was announced in the small hours of the night as winner of the 18th Chopin Competition in Warsaw.

Liu, who entered under the name Bruce Xiaoyu Liu, is 24.

A graduate of the Montreal Conservatoire, he is continuing his studies with the Vietnamese-Canadian Dang Thai Son, who won the 1980 Chopin Competition and was a member of this year’s jury.

Joint second place was awarded to the Italian Alexander Gadjiev and the Japanese Kyohei Sorita.

A Pole, Jakub Kuszlik, won a special prize for the performance of Mazurkas.

Bruce Liu is now assured of an international career.

See also: Lessons to be learned from the Chopin Competition.