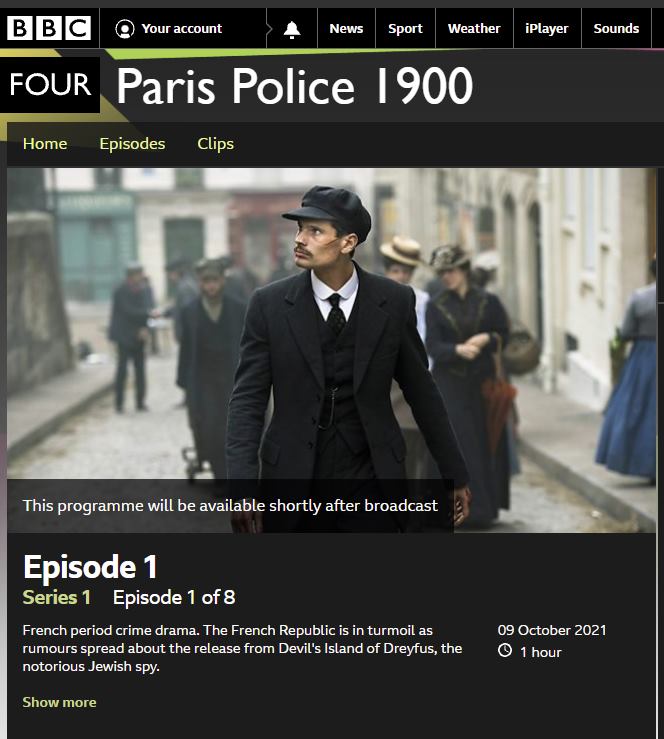 This is a publicity shot for the new BBC4 series, Paris Police 1900. 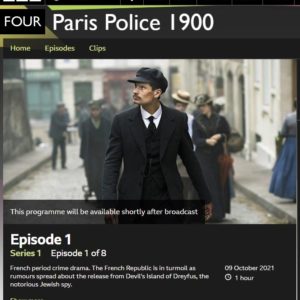 In case you can’t make out the small-print caption, here’s what it says:

French period crime drama. The French Republic is in turmoil as rumours spread about the release from Devil’s Island of Dreyfus, the notorious Jewish spy.

Notorious Jewish spy? Dreyfus was an innocent officer who was framed on a phony charge and sent to Devil’s Island in a case that split 1890s French society. Dreyfus was cleared and repatriated after the real spy was exposed. He was readmitted to the French Army and served with honour in the First World War. A French President eventually apologised to his family (see Genius and Anxiety, p135). The Dreyfus Affair has been chronicled in numerous books, films and a Salzburg opera.

To describe Dreyfus in a BBC publicity document as ‘a notorious Jewish spy’ is antisemitic and anti-history. It betrays a shocking ignorance at the BBC, akin to calling Hitler as ‘a successul German populist’. Every educated adult in western Europe knows that Dreyfus was a victim of antisemitism, not a traitor, but this information has not penetrated the upper echelons of the present-day  BBC.

Sue Deeks, BBC head of programme acquisition, said in a press release reprinted across the media: ‘Paris Police 1900 is a stunningly cinematic look at the darkness beneath the glamour of La Belle Epoque. Historical figures and true events provide a fascinating backdrop to an intriguing murder mystery which will keep viewers gripped to the very end.’

Furious, and frustrated at the BBC’s incompetence.

« Death of a London orchestra boss

A Jenufa joins the legends of a century »