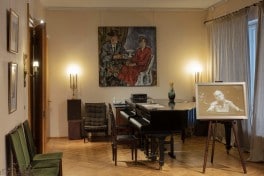 The concert season dedicated to music in theater and cinema will resume at the Sviatoslav Richter Memorial Apartment on 24 September. This time, the theme of the concert will be the music of the great composers of the Baroque era, which inspired the cult reformers of the 20th century to create masterpieces of auteur cinema. The works of J.S.Bach, G.F.Handel, G. Purcell, F. Couperin and J.-F. Ramo will be performed by the laureate of the Triumph Youth Prize Polina Osetinskaya.

The appeal of modern cinema to classical music is a debatable topic. Many directors and composers considered the use of the classics as a “forbidden technique” that allows one to “hide” behind the back of a genius. According to Alfred Schnittke, “music that walks through many paintings expresses, first of all, a lack of initiative. The classics are used by borrowing a spectrum of associations. ” However, the films of directors such as Stanley Kubrick, Ingmar Bergman, Andrei Tarkovsky, Francis Ford Coppola, Lars von Trier and others prove that classical music can become a cultural metaphor in the context of a picture, the most important means of drama, evoking the necessary associations and defining the concept of a film.
The first part of the concert is entirely devoted to the music of J.S.Bach, which for many directors remains a symbol of eternal values ​​and the divine principle. A Space Odyssey of 2001 (1968) by Stanley Kubrick and Solaris (1972) by Andrei Tarkovsky- films of the same period, close in approach to citing the classics. Many colleagues who knew the director well speak of Tarkovsky’s special attitude to Bach’s music. Composer Eduard Artemiev recalled that whenever he went to Tarkovsky’s house, the music of the German composer always sounded in his house. Bach’s works are an integral part of the film language of the director’s three films: Solaris, The Mirror and Sacrifice. There is only one musical quote in Solaris, but it becomes the real leitmotif of the whole picture, opening and closing it, appearing in key scenes. Choral Prelude in f – moll by J.S.Bach(BWV 639) – a symbol of eternal truths, alien to everything small and transient, a sign of the presence of God, looking at earthly life from heaven. It is no coincidence that a quote from Bach is superimposed on another, visual quote: “Pietà” by Michelangelo from the Cathedral of St. Peter in Rome.

« Signing off 54 years in the Cleveland Orchestra