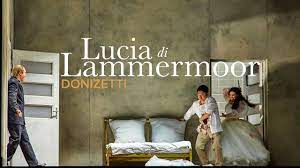 This week’s streamed opera from OperaVision is Lucia di Lammermor

Staatsoper Hamburg’s Lucia di Lammermoor turns the city into a stage. Inspired by worldwide women’s protests, director Amelie Niermeyer has filmed dancers in the city and invites them into the theatre via video. They rush to the aid of the main character Lucia, who – like the director – asserts herself as a woman in a man’s world.  The title role is sung by Venera Gimadieva.

The Plot:  Lucia loves Edgardo, the last heir of her family’s enemy clan. They are in danger, but Lucia refuses to betray her love. A ring falls to the floor, the nightmare begins – the nocturnal sky fills with lightning and thunder, madness and blood reign, there is a corpse, then another and yet another. For pure passion and dramatic tragedy this is the opera to watch .