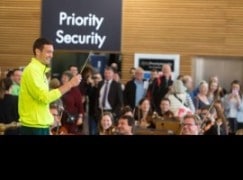 The BBC Scottish Symphony Orchestra has announced details of its Autumn 2021 concerts for Glasgow and Edinburgh. Starting on Thursday 23 August, the orchestra will give nine concerts at its home in City Halls and two Sunday afternoon concerts at the Usher Hall.

Dominic Parker, Director, BBC SSO said: “We’re so excited to get back playing to live audiences at City Halls and the Usher Hall. If anything has become clear over the past months, it’s that our players need and want an audience more than ever. And from the messages of support we’ve received from audiences, it seems like the feeling is mutual.”

In order to reduce the risk of infection, seating for Glasgow and Edinburgh events this autumn will be partially-distanced with reduced capacities in each venue. Audiences will be required to wear masks as directed by current Scottish Government guidance.