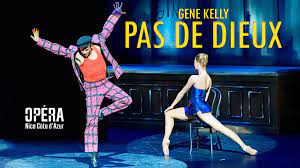 ​Two ballets from Ballet Nice Méditerranée, one a performance of Gene Kelly’s Pas de Dieux , the other Leo Staats’  Soir de Fete. Neither is performed much these days and many of us have never seen either.

Pas de Dieux tells the story of Aphrodite and Eros, who descend to earth. On the beach where they land, the ardent goddess and mischievous god seduce respectively a lifeguard and his fiancée. These newly-formed couples bask in the pleasures of love.
Just when the beautiful Aphrodite is dancing with her suitor, Zeus arrives to win back his fickle wife and everything returns to normal. The reconciled immortals return to Olympus, leaving the humans to their earthly loves.

Gene Kelly, never really a ballet choreographer, faithfully follows the three movements of Gershwin’s Concerto in F. with choreography that is snappy and fantastical, with lots of visual jokes.

George Balanchine admired the other choreographer, Léo Staats, who, because his competition was Diaghilev’s Ballets Russes, never got the fame he deserved in his time.
​
In Soir de Fête, a work from 1925 with music by Delibes, he emphasised the virtuosity of the male dancer, leaping and moving freely alongside his female partners instead of being merely a bearer of ballerinas.

« Opera of the Week – Britten’s turn of the Screw