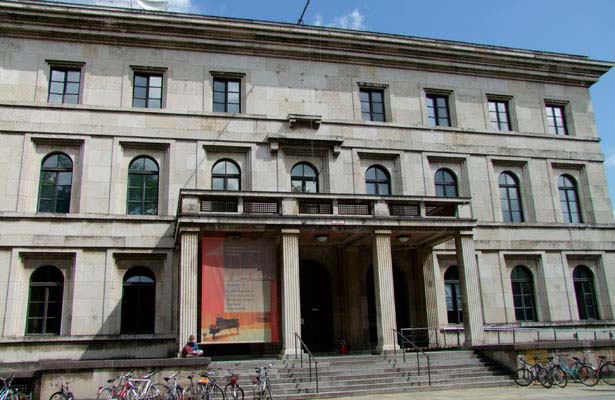 The music academy that was built as Hitler’s HQ

We have published numerous reports about crimes committed in this building by its former rector, Siegfried Mauser, who has yet to serve  a single day of his jail sentence.

Professor Abbie Conant enlightens us:
The Führerbau in Munich which houses Munich’s State Conservatory. It was built as Hitler’s personal office building and is probably the most complete embodiment of Nazi aesthetics in architecture.
It is a horrible place to train music students, but there are no plans to replace it even though Munich is spending an estimated one billion euros on a new concert hall for its radio orchestra.
In what seems like karma, the school has suffered major scandals because its President (Dean,) Siegfried Mauser, was convicted of two counts of sexual aggression and sentenced to 2 years and 9 months in prison. The crimes took place in Mauser’s office which was once Hitler’s office (varied slightly by some remodeling since then.) Bad enough being molested, and surreal when it was in Hitler’s former office. In Munich, the building’s aesthetics and their symbolic meanings are simply ignored, but on a subtle (or not so subtle) level, it degrades the students and faculty. 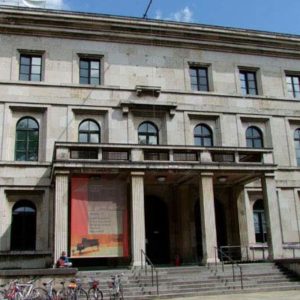 Continuing my thoughts about the Führerbau in Munich. The celebration of ancient Greece and neo-classical architecture was a manifestation of 18th and 19th century cultural nationalism that distorted history. We are to believe that the Greeks were the ultimate source of our culture and knowledge even though the Greeks often spoke of Egypt as the land of learning and the source of much of their knowledge.
The Great Pyramid of Giza, for a well-known example, is a technological, mathematical, engineering, and astronomical marvel that predates the height of Greek culture by 2000 years. This Greek understanding of Egypt as the land of learning extended even into the Hellenic era (323-31 BC) and is one of the reasons why Alexander built his great library there.
Due to the racist agendas of 18th and 19th century European cultural nationalism, these connections were buried and the denial continues to this day. Even our conceptions of monotheism had their origins in Egypt. (See for example, “Akhenaten and the Origins of Monotheism” by James K. Hoffmeier.)
We do not acknowledge the early correlations between Egyptian and Greek architecture even though they are readily observable. See the photo below of the Great Hypostyle Hall. The structure was built duing the 19th Egyptian Dynasty (c. 1290–1224 BC) when Greek culture was barely yet even formed. (See the photo.)
This false history found its way into the neo-classical architecture of all of the capitals of Western culture such as Paris, London, Berlin, and Rome. It is little surprise that the pompous architecture of Washington DC is based on these chauvinistic notions of ancient history. If we had understood that the origins of Greek culture lie in Northern Africa, how would it have shaped our rationalizations of enslaving Africans? How would we have rationalized the slaughter of Native Americans justified by the presumed racial and cultural superiority embodied in The Manifest Destiny? Might our views been more conditioned and qualified?
This false history also had a strong effect on Nazism. By the circuitous routes of history, Otto of Bavaria became the King of Greece. The monarchy thus saw itself as having a particular role in upholding the ancient lineages of Athens. Munich was thus filled with many Greek style monuments, one of the most notable being the neo-classical architecture of the Königsplatz in Munich.⁠
Hitler founded his Nazi Party in Munich where he was strongly influenced by its neo-classical architecture and its wooly conceptions of cultural and racial superiority stemming from the Greco-Roman world. From a cultural viewpoint, the Königsplatz in Munich thus became a central location for Nazi Germany’s ideals. This short video illustrates this history with haunting video montages:

Hitler’s plans for a victorious Berlin after the war (which was to be renamed Germania) illustrate how extensively neo-classism influenced Fascist ideals–probably in no small part by way of the architecture of Washington.
These correlations haunt us in ways even closer to home in the architecture of Lincoln Center. We memorialize in stone our distorted and chauvinistic conceptions of history. We are loathe to admit the embarrassment a more accurate knowledge of history brings.