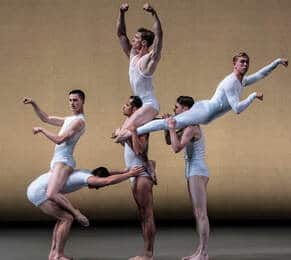 Online until 18 July £20.00
​For the very first time, dancers from all eight of Britain’s main ballet companies – Ballet Black, Birmingham Royal Ballet, English National Ballet, New Adventures, Northern Ballet, Rambert, Scottish Ballet and The Royal Ballet – perform pieces from their repertoire on the same stage. It’s only bits and pieces, to be sure, but definitely worth dipping into for a glimpse at some of the other dance companies in Britain with which we are less familiar.
It’s a fundraising gala hosted by former Royal Ballet Principal Darcey Bussell and television presenter Ore Oduba to raise awareness of, and funds for, British ballet, and a celebration of the artform..
This is a great chance to appreciate the breadth of British dance with repertoire highlights. The funds raised from the live performance and the online stream will be shared between the participating companies and a number of other dance-based companies and charities. With small donations being made to three other contributing charities, the Gala will benefit a total of 19 charities.

The On Demand film of the Gala performance is available to stream in Canada, the United Kingdom and the United States only so, sadly, regular readers in the Far East and other parts of the world won’t be able to see it. For the rest of us, it will remain online until 18 July and you will be able to watch the performance as many times as you choose until it expires on 18 July. £20

« How the French do it worse