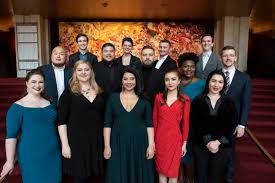 Opera suffers a third major loss in a weekend

Barely has the sad news spread of the deaths of the British opera maker Sir Graham Vick and the Aspen Festival director Ed Berkeley than word came of the death of Robert Cowart, head of linguistic studies at the Metropolitan Opera’s Lindemann program for young singers.

We have no further details as yet. All three men had much still to offer.

Bob, had been a vocal coach at the Metropolitan Opera since 1981 and Juilliard faculty member from 1992.

His specialist languages were French and Italian.

I’m very sorry to share news that the great Bob Cowart passed away this morning.
Bob had been my primary voice teacher for the last 20 years or so. I had worked with him since 1993, my first summer with Marlena Malas’ program in Chautauqua, New York. He worked for Manhattan School of Music, The Juilliard School, The Metropolitan Opera, and many programs domestic and abroad.
One summer in Chautauqua, I got the opportunity to ask him how he knew so many languages. (I have no clue how many, but it sure seemed like all of them!) He answered that when other kids dreamt of being a fireman, he dreamt of speaking other languages. He was destined for it.
When it came to singing, Bob’s commitment to Italian placement was unparalleled. The best sounds I make (such as they are), while obviously impacted by all the teachers I’ve had throughout the years, sound better because of him.

« Salzburg Festival is troubled by flooding