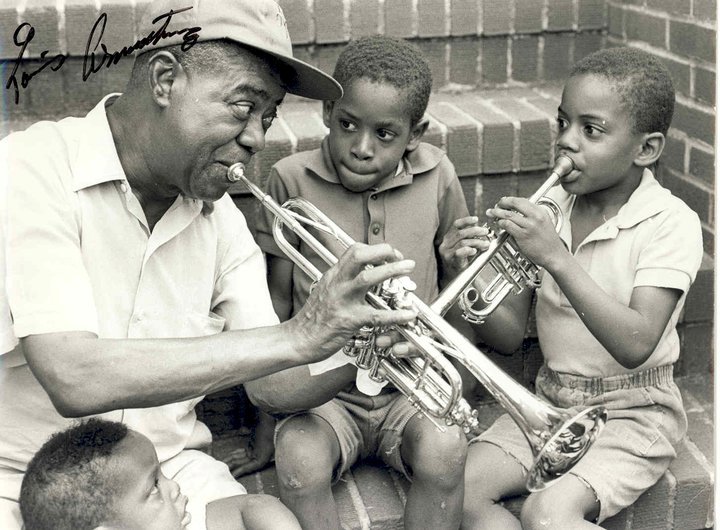 First time I met Satchmo was Xmas time 1949. I had just bought a Louie 78 at Big Joe’s record store on W.46th St. I’m walking down B’way and I’m shocked to see Louie walking up B’way. I remember shouting “Satchmo” and the 2 of us walked, with our arms around each other, uptown to the Capitol Theatre where he was playing. I was so excited, I almost broke my record showing it to him. He invited me to visit him in his dressing room someday. A few days later, with a friend of mine, we bought tickets for a matinee show at the Capitol (75 cents?). After the show, we went to the stage door and I told the door man that Louie invited me to come up. He phoned up to his room, got the OK and up we went. Louie was resting in a cot and the first thing I noticed was the Star of David hanging from his neck and thought, can’t be, he can’t be Jewish! I have no idea what we said but, coming from school, I had my note book which had his picture pasted on the inside cover. He signed it (green ink) and it hangs on my wall today along with a second one he signed at another time.

The second time was my graduation night from H.S. We were having a marshmallow roast on the beach at Coney Island when I remember saying, “Satchmo’s playing at Bop City. Let’s go.” About 5 or 6 of us took the subway and ended up at Bop City on, I believe, 47th and B’way. I told Louie who we were and he made an announcement, the exact words I still remember: “There’s a buncha kids just graduated from Erasmus Hall High School and I’d like to dedicate my next number to them.” He put his horn to his lips and blew Auld Lang Syne ending by skat singing,”old acquaintance, be forgot baba ba doo zip, yeah” all the time looking at me (us). A great musician and a warm wonderful person. 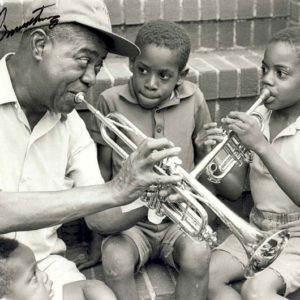 « Bayreuth sells out in two hours