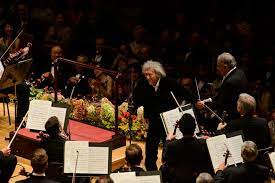 Four and a half years ago, at a Suntory Hall anniversary concert, Zubin Mehta led a clearly bewildered Seiji Ozawa onto his podium to ‘assist’ in conducting the Vienna Philharmonic in a Strauss waltz.

The incident was not reported at the time, perhaps out of respect for Ozawa’s frailty, although the video has remained on the Suntory Hall Facebook page for all to see.

We made a conscientious decision at the time not to share it further.

However, the video has now been tweeted by an Indian businessman and picked up by Mehta-friendly Indian media. It is also on Youtube.

Issues of privacy, delicacy and decency are involved. Seiji Ozawa was clearly in no position to have given consent.

Should Suntory Hall take it down?

« A Venezuelan baton rises in France

Students demand fees freeze. Juilliard says no. So they are occupying the building »