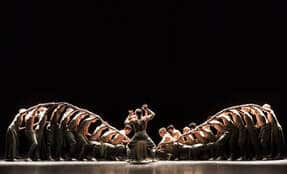 English National Ballet – On Demand
Click here for tickets : rent for three days £4.99-£7.99
I just became aware that the English National Ballet now has its own online channel. There are a number of ballets on offer from short snippets to full-length Giselles and Swan Lakes, along with some shorter and more modern or lesser-known works. Definitely worth checking out.

I chose Le Corsaire (£7.99 for three days) and since we’ve been wallowing in World War One this week, Akram Khan’s Dust (£4.99 for three days), which grabs you from the start and does not let go.
Le Corsaire is a wonderfully enjoyable piece of silliness about love and betrayal on the high seas, encased in a classic story ballet.

Faraway lands, a dashing swashbuckling pirate, Conrad, and his feisty girlfriend Medora have many adventures in a variety of settings. It’s all so silly that it’s not surprising that the ENB is the only UK company still performing this ballet but their version is lavish, with gorgeous decors and costumes created by Hollywood’s Bob Ringwood.

The cast is first rate – Alina Cojocaru as Medora and Vadim Muntagirov as Conrad. Choreography is the usual muddle but generally attributed to Joseph Maziller by way of Petipa, and the score is sort of by Adolphe Adam before it was adapted by goodness knows how many conductors ever since. At least that’s how it was in 1856 but who knows, or really cares, at this juncture? My minority view is that it doesn’t have to be consistent.
​
Dust was created by Akram Kham in 2014 as part of Lest We Forget, a programme commemorating the centenary of the First World War and reflecting on the experiences of those who fought in the conflict, and those who stayed behind. Cast includes Fabian Reimair, Tamara Rojo and James Streeter.
Each ballet can be rented for three days and prices vary from £4.99-£7.99 which seems to me very reasonable.