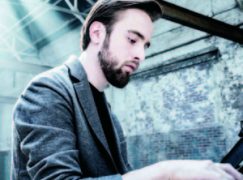 Touring remote parts of Russia, with Gergiev: 11 concertos and the Art of the Fugue in 17 days.

Dear Friends, My concert tour in Russia has ended. Together with Maestro Gergiev and the Mariinsky Orchestra we visited such places as Kazan, Ekaterinburg, Omsk, Krasnoyarsk, Tomsk, Tyumen, Perm, Moscow, Vladikavkaz, Volgograd, Bryansk, Cheboksary, and my hometown, Nizhny Novgorod.  To say that the feasibility of organizing such a tour in the current situation was improbable is an understatement! Nevertheless, thanks to many creative and organizational efforts, the tour has happened. Every performance was assessed and presented according to the epidemiological situation and regulations in each region; in some places only 50% of the audience capacity was allowed, in some 75%, and some even had a full 100%. This tour showed that despite the difficulties of the current situation, following safety regulations for not just single concerts but for whole concert tours is entirely possible. During the tour, not a single PCR test came back positive; even on the private train, used by the Easter Festival, no one from outside the tour was allowed to board or travel on it, and everyone on the train was either vaccinated, had proven antibodies, or had undergone a quarantine. What lesson can we learn from this for future concerts and tours? It’s that while respecting protective measures – including vaccinations, especially of those in the higher-risk groups – we can return to a performing life that feels increasingly familiar and normal. I want to express the level of joy I felt to be performing again for the public, on a full tour: it filled me with creative energy and a new impetus for further work. Of course, the risks remain, but what was in our power to control was done successfully. I really hope that this tour will set an example for the world’s concert industry and will help show us all a way forward. Love the music.

« An Isaac Stern violin is up for sale