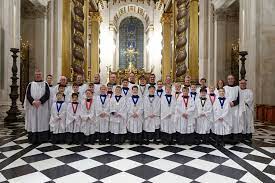 Reader’s Comment of the Day, by a former St Paul’s chorister:

We are looking at a choir that has gone from 18 men [every day until 1981, then 18 on Sundays only] and 38+ boys singing 10 services a week [Matins and Evensong on Saturdays; x3 on Sundays] to 12 and 30, and now possibly being reduced further – to nothing at all…yet all the while striving to maintain as it has done to date the musical excellence that has always made it ‘then best of the best of the best’ (as BMR always told us).

It is easy to blame a virus or wider secularisation of society (I was a chorister in a small village church choir in the late 70’s – what is of parish choral music-making now?), but if this is true, it is too horrible to contemplate.

And of course, if true, think of the ripple-effects if no boy choristers: reducing the numbers of music scholarships to schools and likely progression to Choral Scholars and entering the music profession as adults.

Consider too how in the War the boys went off to Truro, but the men still sang daily – perhaps the threat to their life was ‘differently-dangerous’ but they continued al the same. No such joy (or spiritual relief) in lock-down or much of it anyway.

(And I recall an Evensong when there was an IRA bomb-scare – but we carried on singing at least until the end of the Psalms [for the day, of course]..!)

But with all that in mind, and the ‘lack of tourism’ being given as a primary reason – St. Paul’s only ‘recently’ (late 90’s?) charged an entrance fee – how did it support itself until then (and a larger choir to boot)? Might its then supporters make themselves known once more?

Perhaps some, if not all, of the monuments to all those great and good 18th and 19th Century men can be removed and sold off for scrap marble…might that help…?

And to think there is talk of a Covid chapel (or equivalent) costing millions – why (other than to tick an ‘on message’ box)? Where’s the one to Spanish Flu, Hong Kong flu, Yellow Fever and malaria victims etc etc, all of whom are far greater in number… and who will sing at its ‘blessing’ ?