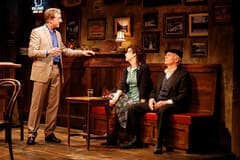 The Weir – Irish Rep
Click here for tickets – $25 for a 48hour rental
I’m delighted that several of my favourite Irish plays are now being issued On Demand by Irish Rep in New York. The advantage of On Demand is that we can watch them at a time convenient for us and don’t have to wait until the theatre is showing them on its own schedule. This On Demand is somewhat more expensive, $25 a play, but it’s worth it for this gem of a play.

​The Weir is by  Conor McPherson, a sort of language magician who can turn the most down-to-earth speech into poetry. Newsweek’s critic wrote of The Weir, “This play is one of the best that Irish theater – and by extension world theatre – has produced in 25 years.” For what it’s worth, I agree wholeheartedly.
Set in an Irish country pub, a young woman is spellbound by stories told by the bachelors who drink there regularly, showing off for the newcomer. With the wind whistling outside, and a whiff of sexual tension in the air, what starts out as blarney darkens as the tales drift into the realm of the supernatural. Then, Valerie reveals a startling story of her own…

​Directed impeccably by Ciaran O’Reilly, the cast includes some of the best Irish and Irish-American actors, including Dan Butler, Sean Gormley, John Keating, Tim Ruddy, and Amanda Quaid as Valerie.