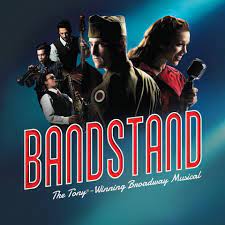 Memorial Day, when Americans hold parades to thank their military veterans, is a big deal (and a public holiday) in the US. In celebration of Memorial Day, Broadway On Demand (US) and Stream Theatre (UK) will stream the filmed version of the Broadway musical Bandstand.
Set in the smoke-filled, swing-fueled night clubs of 1945, Bandstand finds singer-songwriter Private Donny Novitski as he attempts to rebuild his life after returning home from the battlefield. When he hears about a national music competition, Donny joins forces with a motley gang of fellow musician-veterans, and together they form a unique group.
Written by Richard Oberacker and Robert Taylor, Bandstand stars Corey Cott, Laura Osnes, and Beth Leavel, and is directed and choreographed by Andy Blankenbuehler.

For some reason I don’t understand, the US viewing period starts this week, the UK not until a week later which is why there are different ticketing links.

Accompanied by his mother »