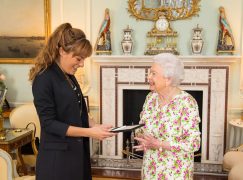 One violinist sees further than the rest

The group has already recorded a Decca album of Vivaldi concertos, along with Geminiani’s arrangement of Corelli’s ‘La Folia’.

Nicki says: ‘This music is so deeply invigorating, energy-giving, freeing, grounding and moving. I am so excited to be releasing my first baroque album with this wonderful group of freelance musicians, and to have the opportunity to perform it for people in the hauntingly beautiful setting of Battersea Arts Centre. I have long dreamt of presenting a project which brings together a recording, live performance and our education work and with Baroque we are finally achieving this. Emotionally and psychologically musicians crave making music together and performing for people, live. As we hopefully emerge from this dark pandemic period, we want to bring hope and uplift and baroque music, especially Italian Baroque with all its song and dance, does this to the fullest. It expresses joyousness and drama in equal measure. It celebrates and embodies dance, community, and improvisation. It has rhythmic continuity and solidity, discernible harmonic sequences and patterns. This music must be stepped into like you are stepping into an opera. We musicians are all acting, all giving and taking demonstratively and with fervor. It’s full of stories we all relate to, and was intended to be understood and enjoyed. Early eighteenth-century Venice’s public wasn’t any old public, though. Everyone made music of some kind, be it at home, in the street, on or offstage. Amateur music-making was shared, and inspired sharing. Music was a part of people’s lives; written, played and sung for and by the people. But I’ve also long believed that Baroque music in general is an untapped secret for the world of collective and community music making and occupies an odd place in our formative years of learning instrumental music. We have so much more to learn from the energetic and revolutionary advancements in baroque interpretation. We can approach these works in ways that inspire fun and enjoyment, a greater sense of togetherness and community, a true abandonment of caution, and an embracing of scratches and scrapes. We can, through this music, connect more thoroughly to dance and rhythm, and contemporise its relevance. And I absolutely cannot wait!’

The new orchestra is composed of
Violin I: Kati Debretzeni, Jane Gordon