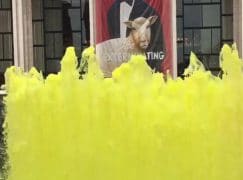 Musicians turn up the heat on Lincoln Center

From a letter to Local 802 members by its President Adam Krauthamer:

Most of you know that Lincoln Center is producing a series called Restart Stages, which includes performances at Damrosch Park.

The problem is that Lincoln Center — even though it controls the money — is refusing to act as the employer of its musicians. Instead, it’s sending out non-union contracts to our members and forcing musicians to negotiate directly with bandleaders and music directors. This shirking of responsibility means that there’s no union agreement or pay scale for Restart Stages.

The current recovery is very fragile. We need maximum support from arts institutions such as Lincoln Center, which is home to some of the largest employers of musicians in NYC. Money is flowing into NYC through the American Recovery Plan, and Lincoln Center is one of the beneficiaries. At this time more than ever, musicians need support — including a guarantee of fair wages and benefits….

To put it bluntly: Lincoln Center has the responsibility, the duty and the moral obligation to pay area standards and assume the role of direct employer of musicians — instead of deflecting this requirement.

« A maestro’s grandson stars in Law and Order

Met musicians find new home on the Far West Side »