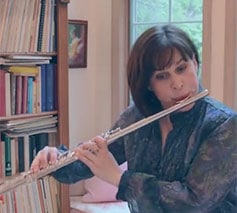 Why is my orchestra such a hostile workplace?

Emily Skala, principal flute of the Baltimore Symphony, recently felt the wrath of her management and some of her colleague when some of her less orthodox opinions were leaked to the media. Emily believes this hostility is endemic to many orchestras, especially those where minorities of gender and race are seriously underrepresented.

She has published a response to the issue in the Baltimore Sun, which we are happy to share with an international readership.

I am a professional classical musician and educator for 38 years, 32 here in Baltimore. I’ve performed in all the major venues of North America, Europe, several in Asia and a few in South America. My students and colleagues have come from all over the world, representing all ethnicities, and music has been our common thread. My employer, the Baltimore Symphony Orchestra, recently sought to distance the organization from me and my views, expressed on Facebook, regarding coronavirus and the legitimacy of the November election. Subsequently, someone I do not know has aired two of my work emails on social media as supposed evidence of racist and anti-Semitic beliefs. (”Baltimore Symphony Orchestra rebukes flutist over social posts pushing conspiracy theories on vaccines, election,” Feb. 16)
I had posted information from what I understand to be peer-reviewed studies, independent journalists and licensed medical doctors who weren’t chosen to be presented on our mainstream channels, along with educational videos and charts. These pieces contradict what we are being told through mass media. I posted these things as an act of compassion, an act of humanitarian aid. After all, I have been rescuing animals from the age of 4, teaching music from the age of 15, gainfully employed since the age of 21, and a member of Amnesty International and the like since the age of 26. My social media activity is simply consistent with who I am.

BSO senior management believes by making an announcement distancing themselves from my views, they are safeguarding their interests. In their post, management claimed that my activity does not comport with their “code of conduct grounded in humanity and respect.” This led to a public outcry for my resignation, as I am supposedly not worthy of them. And of course, this must delight the “colleagues” who supplied my work emails to Baltimore-based soprano Melissa Wimbish, who tweeted about how “upsetting” she found them.

How backward this all looks from my vantage point. Where is “humanity and respect” when the BSO allows its musicians to claw away at each other, fomenting hate speech on the BSO’s professional Facebook page for patrons and donors to participate in the public stoning of a veteran VIP player? A local singer suggesting the principal flutist is a danger to the organization and personnel? While leadership does nothing? Does that sound respectful? Humane? Where is the public show of support from the chair of the Players’ Committee? The Union?

My emails were exposed for two reasons: I spoke of two of my own experiences with discrimination. First in Pittsburgh, where I believe leadership colluded with another player to ensure I would not receive tenure; and second, here in Baltimore, where I have been the first female principal in the wind, brass and percussion sections of the BSO since joining in ’88. It was another 12 years before the BSO had another woman leading a section, violinist Qing Li in 2000, followed by oboist Katherine Needleman in 2003, conductor Marin Alsop in 2005, and violist Lisa Steltenpohl in 2014.

If we are going to be honest about diversity, equity and inclusion (DEI) in the BSO, please let’s acknowledge our significant progress, and our Asian, Portuguese, Mexican/Native American musicians, and women principals, as well as our Black colleagues who populate the stage in 2021. By my count, we have 17 musicians of color, including a narrator, and 28 women out of 77 players. Altogether, we have 35 people — nearly half of our performers — who are traditionally underrepresented in symphony orchestras.

This was the point I was trying to make when my microphone was purposely cut off at last summer’s DEI Zoom meeting. I was once again experiencing workplace discrimination by a male colleague for being a female leader exercising my voice and expressing my ideas based upon my legitimate experiences, which I then wrote about in two emails to the participants in that meeting. I considered the point to be very, very important, which is why I risked everything, trusting even the potentially untrustworthy colleagues with my truth, in search of an honest exchange under the aegis of diversity, equity and inclusion at the Baltimore Symphony Orchestra. I was extremely upset after that incident. I called a member of senior management to explain what had happened and asked for her help. I let her know, not for the first time and not for the last time, that we have a problem with discrimination against women; that I am being harassed.

Well, the quality of senior management’s response to this call is on display now. And this player is coming forward to ask you to hold them responsible for a hostile workplace.

The writer is the principal flutist in the Baltimore Symphony Orchestra.

« Death of a major US luthier

Royal Swedish Opera is shut down by major Covid outbreak »