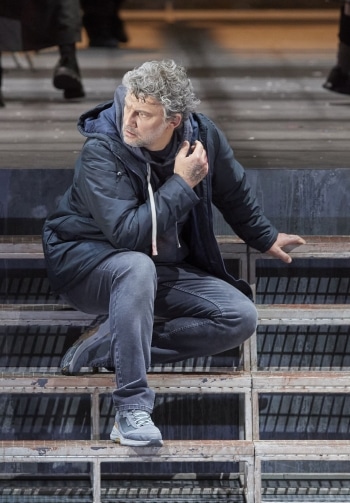 First reviews of Kirill Serebrennikov’s new Parsifal production at the Vienna State Opera point the spotlight at Putin’s political prisoner. The director himself is unable to leave Russia. The opera was screend last night on ORF and first reviews are appearing today.

From the Wiener Zeitung:

If one takes this “Parsifal” not as a narrative literally, but as a flood of images, it creates an enormous effect. Perhaps never before has the State Opera experienced such a cinematic, powerful physical and mentally captivating spectacle. How Amfortas, marked by self-harm, wants to open his veins due to an accusing father’s voice in her ear, is an example of this strong stuff. Poetically the doubling of the hero: the young Parsifal (actor Nikolay Sidorenko) faces the mature knight of the third act from the start, in the form of Jonas Kaufmann. With a metallic and distinctive sound, he sings the first two acts mostly on the ramp until the characters begin to see each other in a higher sense.

Just finished watching Act One of Serebrennikov’s new production of Parsifal in Vienna. Even based on this one act, I have to say it will stay in the annals of Parsifal productions as one of the most fascinating, insightful, gripping and psychologically intense productions, alongside such a masterpiece as Herheim’s Parsifal in Bayreuth (actually, I dare say, in its powerful intimacy and humanity, it’s just as good if not a better production). Stupendous Gesamtkunstwerk Wagner would have been proud of (even though there is a number of cultural references that might be obvious only for the Russian audience).

So now Kirill Serebrennikov let us know how he sees the work. To anticipate it right away, he either did not understand it or did not know what to do with it. Rather, he apparently processed his personal fate in his interpretation. He lets the work play in the first and third act in a prison, in the second in the editorial office of a glossy magazine. Of course, the prelude is illustrated, because ten minutes of music alone is of course not possible in today’s theater. Parsifal apparently comes back to the prison where he was incarcerated as a boy and experiences everything all over again when he is doubled by a young actor. During the foreplay, numerous prisoners come in either doing morning sports or fighting with each other. The first words of Gurnemanz “Hey! Ho!

« Liam Scarlett was terminated without trial or transparency