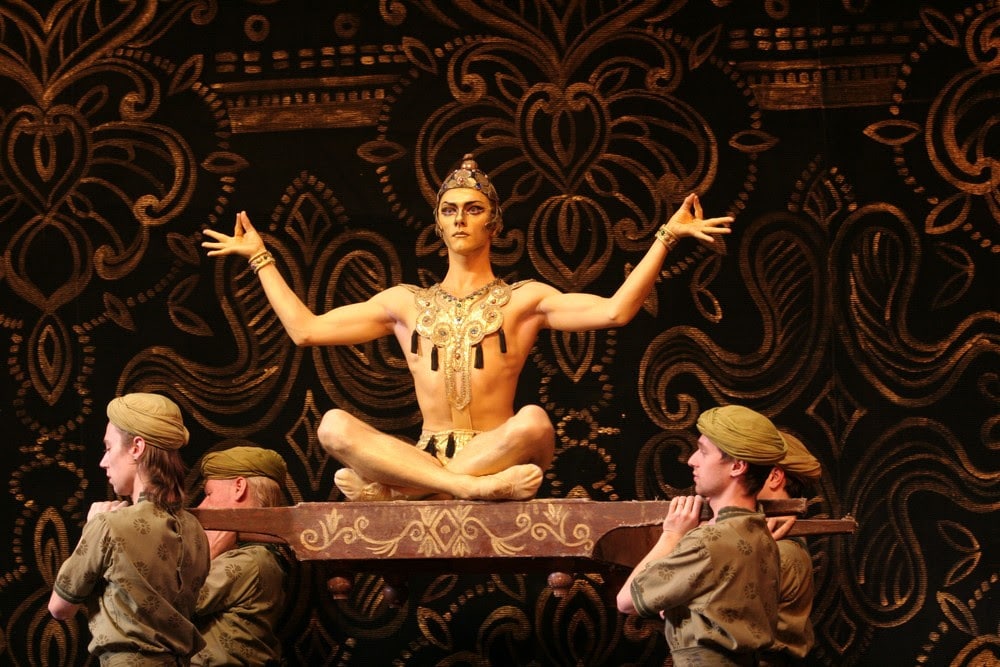 No bad thing to ban Bayadère

As someone who was really excited to watch the Bolshoi production of La Bayadere on Blu-Ray for the first time, I was unable to finish watching when I was blindsided by the young girls dancing in black and brown face. I know Russia does not have the same history of black/brown face, but seeing people wear dark skin as a costume and dance in jerky ways that appear mocking was deeply shocking and uncomfortable and made me feel inhuman to the people who made it on a purely artistic level. I realize I’m opening myself up for ridicule here, but I don’t think making modifications to existing art to make it more fitting of modern sensibilities necessarily ruins that art, it just makes it different. Art is constantly changing and ballet should change with it. It doesn’t have to be all at once, and even though I myself couldn’t finish watching it (or at least this production in particular), I would hate to see La Bayadere disappear altogether. But I also can’t say people who feel it is disrespectful to their culture are completely in the wrong either. People conflating modern inventions and innovations with cultural customs that have deep personal and societal meanings are completely missing the point.

This was the press release that provoked the original furore:

Hindus are critical of Opéra national de Paris (France) for hosting during its 2020-21 season ballet “La Bayadère”, which they feel seriously trivializes Eastern religious and other traditions.

Hindu statesman Rajan Zed, in a statement in Nevada (USA) today, said that taxpayer-funded Opéra national de Paris should not be in the business of callously promoting appropriation of traditions, elements and concepts of “others”; and ridiculing entire communities.

Zed, who is President of Universal Society of Hinduism, indicated that this deeply problematic ballet was just a blatant belittling of a rich civilization and exhibited 19th-century orientalist attitudes.

It was highly irresponsible for a prestigious national organization to choose such a ballet which had been blamed for patronizing flawed mishmash of orientalist stereotypes, dehumanizing cultural portrayal and misrepresentation, offensive and degrading elements, needless appropriation of cultural motifs, essentialism, shallow exoticism, caricaturing, etc. Opéra national de Paris, whose history goes back to 1669, could do better than this to serve the multi-cultural audiences, Zed stated.

Rajan Zed also urged Opéra national de Paris board and management to re-evaluate its systems and procedures and send their executives for cultural sensitivity training so that such an inappropriate stuff did not slip through in the future.

Like many others, Hindus also consider ballet as one of the revered art forms which offers richness and depth. But we are well into 21st century now, and outdated “La Bayadère”, which was first presented in St. Petersburg (Russia) in 1877, is long overdue for permanent retirement from the world stage; Rajan Zed points out.

“La Bayadère”, scheduled from December 24, 2020 to January 02, 2021 in Opéra Bastille (Paris); claims to be a “a flamboyant spectacle” “in an imaginary India complete with elephants, tigers and palanquins”. Tickets of this two hours 50 minutes ballet in three acts and two intervals, cost up to 165 €.

Winners and losers of the Covid year »