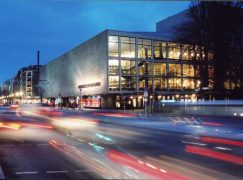 How Germans cherish their opera

From an intensive report in the Christian Science Monitor:

… About a third of all opera performances worldwide take place here, and Germany has cultivated a society where children are schooled in music theory and adults commonly budget for opera season tickets.

“Berlin is a city where I’ve gotten into taxis and said, ‘Take me to Deutsche Oper,’ and the driver launches a discussion about ‘Don Giovanni,’” says Mr. Carico, a freelancer who was formerly salaried at Berlin’s premier opera company. “Music is baked into society here in a way I haven’t experienced in America.”…

Nearly every midsize German city has an opera house, which has gifted fans an enviable set of statistics. Germany is home to 1 of every 7 of the world’s opera houses, and nearly 4 million people attended the opera during the 2018-19 season….

“The state financed us through this situation,” says Mr. Theiler. “We aren’t in danger of going broke because there is a vested interest in keeping us afloat and running, so that we can be here as soon as we are allowed to re-open.”

More than a year into the pandemic, the Saxon State Opera hasn’t let anyone go, keeping about 800 musicians, singers, dancers, administrators, and other workers, including the house tailor. Freelancers on contract were also paid.

Heading for half a million Bach views in a month »