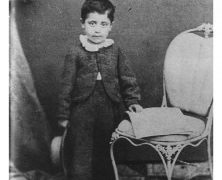 From a speech by the Federal Culture Minister Monika Grütters: ‘Sudeten German artists have written history in many ways, which is an integral part of our educational canon: in music with Gustav Mahler, in literature with Rainer Maria Rilke, and in the film Oskar Schindler is immortalized, who saved 1,200 Jews from the National Socialist terror regime.’

How wrong is that?

Mahler was not Sudeten. He was born on the Bohemia-Moravia borders to a Jewish family, citizens of Austria-Hungary. To depict him as ethnically Sudeten and a symbol of German unity is a particularly ugly distortion in light of what Sudeten Germans symbolised.