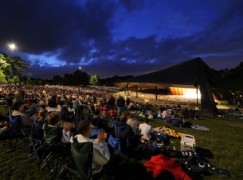 In line with Boston rolling out its Tanglewood summer schedule, Cleveland is also soundg hopeful.

An all-Mozart program will be presented July 11 under the baton of Jane Glover. The Great American Songbook comes to Blossom, performed by Broadway star vocalist Capathia Jenkins and led by Lucas Waldin on July 18.

Venezuelan conductor and music director of the San Diego Symphony Rafael Payare makes his Cleveland Orchestra debut on July 25 in Dvořák’s Symphony No. 9 (“From the New World”).

On August 1, Herbert Blomstedt returns to Blossom for Beethoven’s Symphony No. 7. Karina Canellakis, Chief Conductor of the Netherlands Radio Philharmonic Orchestra, makes her Cleveland Orchestra debut on August 15 with Tchaikovsky’s Symphony No. 4.

Originally scheduled to make her Cleveland Orchestra debut last season, Elim Chan will lead the ensemble for the first time on August 28, in a program featuring Elgar’s powerful and mysterious Enigma Variations.

Zubin: The Mayor of New York never came to my concerts »