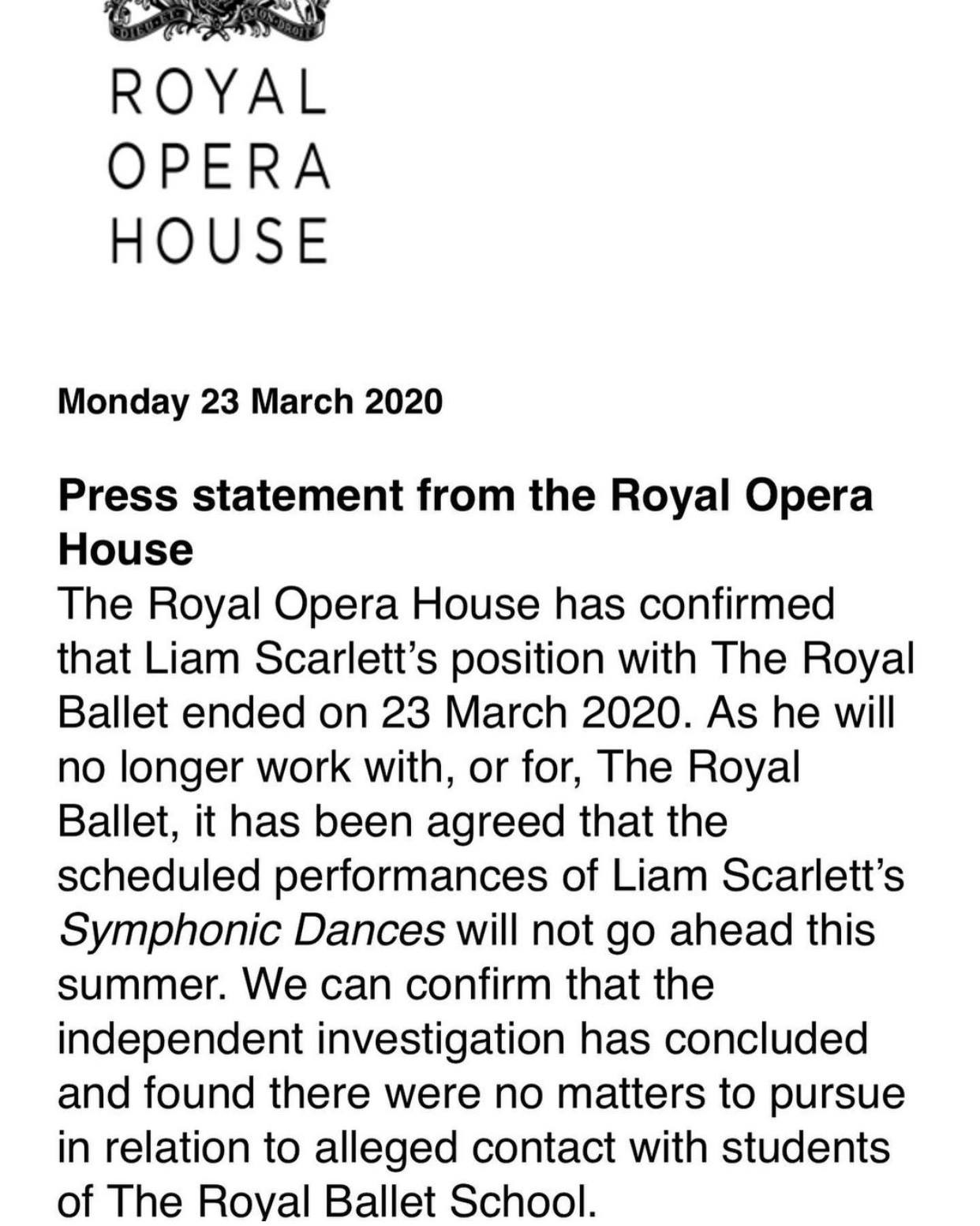 The former New York Times ballet critic surveys the aftermath of a dance world disaster in a post for Slippedisc:

I’m assured by people who first knew choreographer Liam Scarlett in the last century that the details surrounding his death are known to very few. We should not assume, as many have done, that “Cancel culture” was the determining factor.

It’s also worth noting that, when a number of companies terminated their associations with Liam Scarlett in 2019-2020, not all followed suit In October 2020, he went to Munich to stage his “With a Chance of Rain” (2014) for the Bayerische Staatsballett. A British dancer there has written that his behaviour was nothing but professional, and that he impressed all as having learned from his errors and as happy to be given the chance to move on. The Royal New Zealand Ballet also announced that it would revive his “A Midsummer Night’s Dream” (2015) at Christmas 2021. I attach press statements by both these companies (6, 5). I also attach (7) the original – baffling – March 23, 2020, press statement by the Royal Ballet that severed the company’s dealings with Scarlett while assuring us that “There were no matters to pursue with Royal Ballet students”.

All this makes it all the more vile that some voices on social media have rushed to assume the worst of the behaviour that led to Scarlett’s downfall at the Royal Ballet. Sanctimoniously and aggressively, a number of people, undeterred by his recent death, have denounced any silence about his behaviour as symptomatic of the favour automatically doled out to white, male, figures of power who are guilty of predatory, heinous, sexual abuse, despite their ignorance of whatever Scarlett may have done and despite the Royal Ballet’s 2020 statement. (I have my own cancel culture when I hear from those vindictive and censorious new puritans: I block them.) Let’s only have art by the virtuous! Let’s have more art by those who are as smugly virtuous as ourselves! No art by sinners for us!

Simply, very few people indeed know what led to Scarlett’s downfall at the Royal Ballet (I, too, have heard extensive rumours, but they are just rumours), and fewer people know the circumstances immediately leading to his tragic death. (He died in his home town, Ipswich, Suffolk, a place I have known all my life.) He is being widely remembered as an important choreographer, and, with great affection, as an engaging and friendly dance professional. Some who believed in his creative talent went on presenting and/or programming his choreography during the past year. I agree that there are powerful white men who are sexually abusive, whose injurious behaviour is covered up by the system, and whose victims suffer – but I do not have the information to qualify Scarlett as one of these.

During the 2019-2020 period of inquiry into his alleged offences, the Royal Ballet never dropped his production of “Swan Lake” (2018), which was the last thing it danced before the March 2020 lockdown. Somehow, after the inquiry, the company saw fit to announce the cancellation of its 2020 revival of his “Symphonic Dances” (2017) while continuing with his “Swan Lake”. Why?

One factor is that it was easier to keep his “Swan Lake” going without him returning to rehearse it. Another factor was that the staging was so extremely and showily expensive that the company could not face also cancelling that. For those of us who found it deeply foolish, this continuance in repertory is distasteful. For those who admired it, its return will be a consolation. 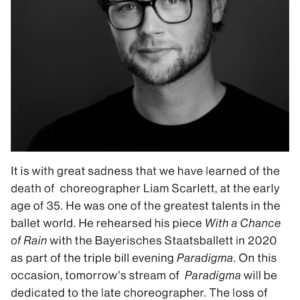 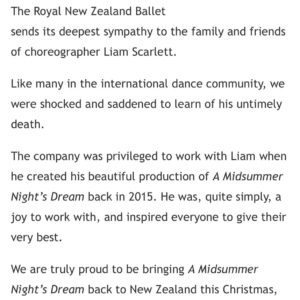 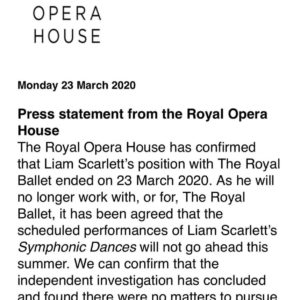 A Berlin orchestra for American music »