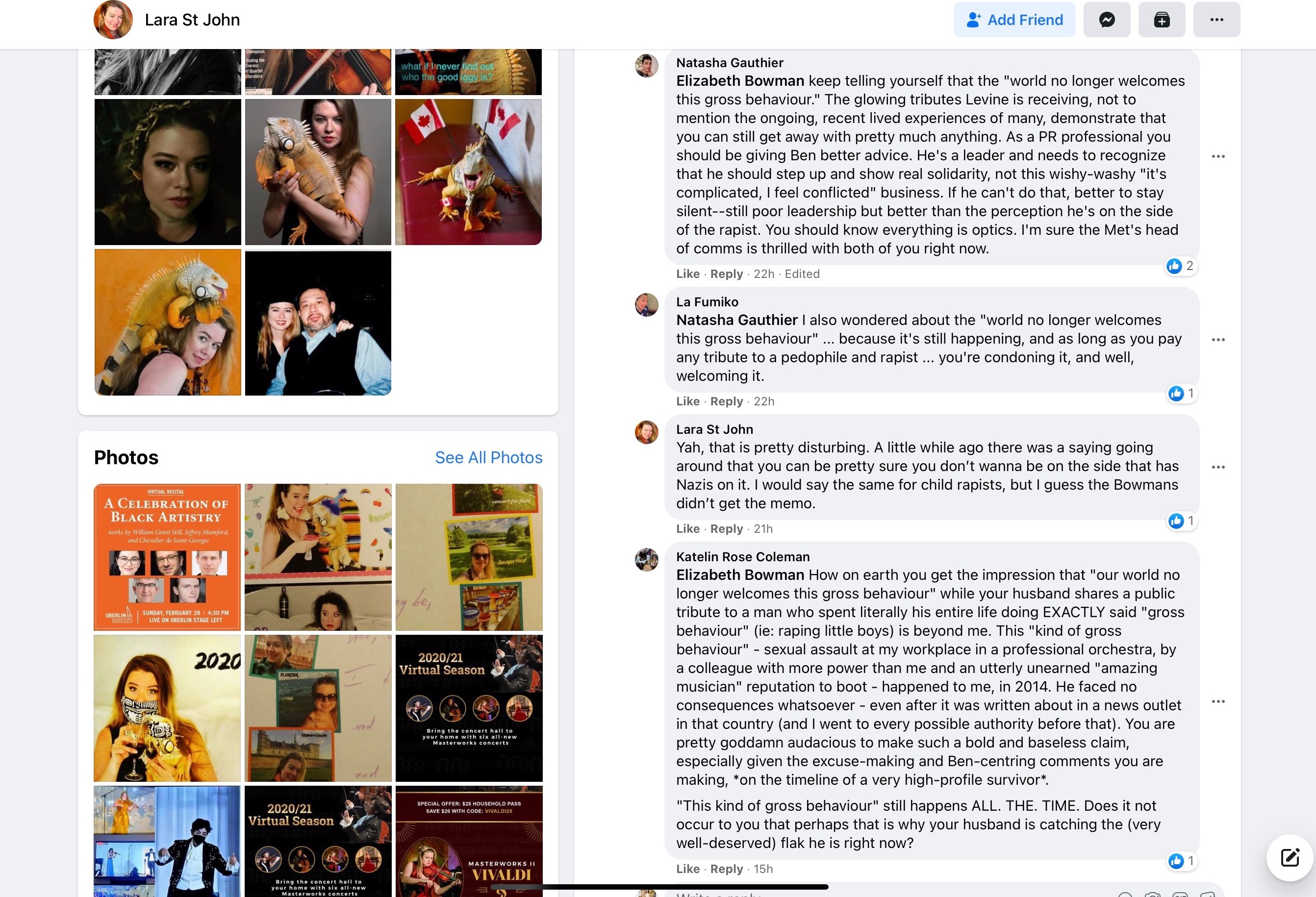 We attach two screengrabs to show how divided American musicians remain about dealing with the aftermath of James Levine – their country’s most accomplished conductor who was also a lifelong sexual abuser.

Under attack here are the violinists Charles Castleman and Benjamin Bowman, but it could be you, or me, or anyone who speaks out of line.

The wells are well and truly poisoned. 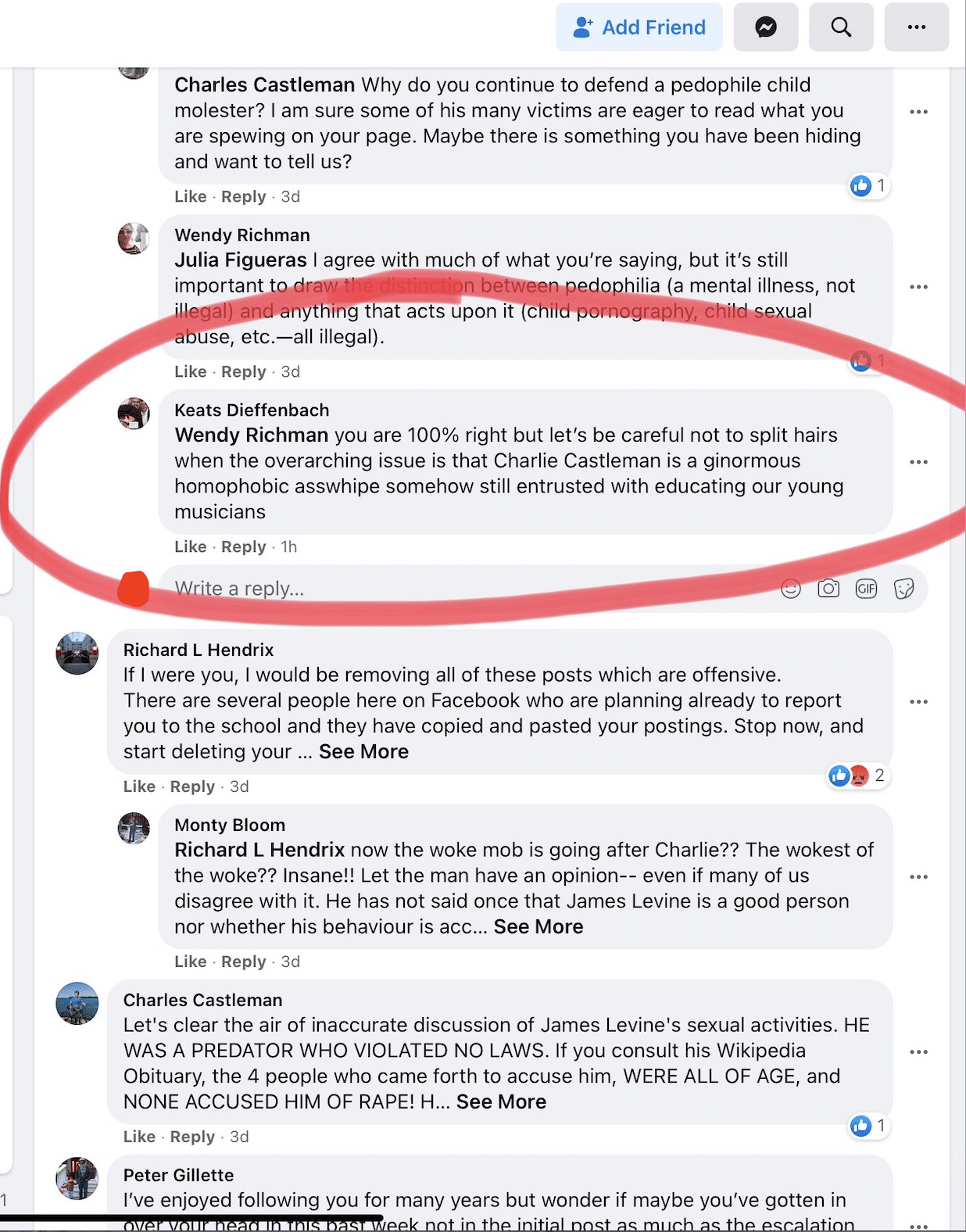 Hi again friends! So yucksy this keeps having to be about this crap (see? I never swear in writing), but here is my little note to the concertmaster of the Met, a countryman of mine, so hopefully he can understand where we’re coming from!!
Hi Ben. I know we don’t know each other very well, but I do understand your wanting to pay tribute to a person who doubtless helped you a lot and from whom you learned a great deal. Just so you understand the comments which have “saddened” you, somehow we all knew about his “proclivities” (NYTimes) far and wide, from Nanaimo to Miami, St. Johns to L.A. from the time you were a little boy, and for you to have never heard anything at all about this until 2018 is, well, just amazing! Incredible, one might say. Nevertheless, it must have dawned on you in 2018 that it likely was not just “improprieties” (NYTimes). Our opinion is that a person who ruined many lives for his sadistic pleasure and was saved time and time again from incarceration and certain death by the institutions that made money off him and one who eventually paid him to leave, is probably best not remembered for the nice things he did for you, and recordings he made. That’s all! I think I speak for all of us in trying to explain the remarks above. All my best, Lara
EDIT His post:
RIP, maestro Levine. What a tremendous loss for music! I will be forever grateful to have had the chance to work together.
EDIT his wife has asked me to put up his comment for context so here you go:
Elizabeth Bowman
Hi Lara, could you include Ben’s text in your response to him? Just so that your followers can see what you are responding to? It’s important for context.
“I am really saddened by some of the comments I’ve read here. The intention of my original post was to simply express my sense of loss for an artist’s talents that I have respected a lot in my lifetime.
Long before I knew anything about Levine’s personal life, I studied and admired his work. I grew up on his recordings, I fell in love with opera because of his work at the Met. I dreamed of one day being in that incredible orchestra. And then after many years, I managed to play a successful audition to him and get the very job of my dreams…this was a gift like no other.
When I finally worked with him, he spoke respectfully to me and gave me encouragement as I embarked on my journey with the Met. He talked with me about Mozart and Verdi and opera in general, discussions (lessons) I will never forget. I felt lucky, grateful. This was fall 2017, several months before the Levine story blew up publicly.
My experience with Levine is unique to me, and it forms an important part of my musical journey. Unfortunately this renders the processing of his passing more complicated for me than it might be for others.
I believe it is my right to express — on the occasion of learning of his death — that I respected his artistic gifts, and that I have benefited from them. This does not in any way mean that I support the horrible things he did to people over the years. Quite the contrary— I absolutely believe in fair and equal treatment for everyone.
In this vein, anyone reading this who is a victim of sexual abuse or abuse of power – or both – know that I support you. It must be impossibly difficult to cope with.
I’m encouraged that we have already made progress moving forward and away from Levinian behavior, and we can work together to continue to improve conditions so that that type of behavior won’t be tolerated anymore at any level.
Peace, love, and respect to all.”