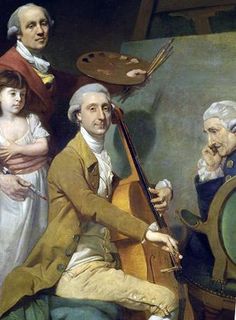 The cellist in Haydn’s concerto was a London Jew

Haydn’s 1783 D major cello concerto (Hob VIIb:2) suffered a checkered reception for much of its early history. Much of this owes its long rumored association with Haydn’s principal cellist at Esterhazy, Anton Kraft, who for years was believed to have premiered and heavily influenced, or perhaps even composed, the work.

Now new research, published in 2019 by Thomas Tolley building on discoveries of Simon McVeigh, has clarified the origins of the concerto, presenting compelling evidence that it was neither written for nor debuted by Anton Kraft, but composed for and premiered in London.

On March 24th, 1784 in the London press, advertisements announced the debut that evening of “‘A new Concerto, Violoncello, Mr Cervetto, composed by Haydn.” (The C major concerto was, at this point, more than twenty years old) The concert series at Hanover Square in London was presented by Willoughby Bertie, 4th Earl of Abingdon, an amateur flautist and composer, who commissioned several new works by Haydn to present during his 1783 and 1784 concert series.

The soloist of the premiere, James Cervetto, was the son of the Italian Jewish immigrant and noted cellist Jacob Cervetto. Cervetto the younger was the principal cellist of the Italian Opera in London and one of England’s leading solo cellists, known for his tone and expression ‘equal to the best tenor voices’ as well as his brilliant virtuosity. As one of the early proponents of thumb position (including the use of the fourth finger in thumb position!) he could easily sightread violin parts at pitch when the need arose in chamber music. Haydn did not travel to London for the performances and is likely that the parts used for the premiere and a repeat performance one week later were destroyed to protect Haydn’s rights, as was the case with Abingdon’s other Haydn commissions. Reviews of the concerto’s 1784 debut emphasize how Haydn’s score was ideally matched to Cervetto’s strengths, particularly his expressive cantabile lyricism and florid virtuosity.

Why, then, has this concerto so long been associated with and even ascribed to Haydn’s first cellist at Esterhazy, Anton Kraft? Since the origins of the commission and premiere had until now been lost to history, the concerto required the skill of a top virtuoso, and Haydn and Kraft were both at Esterhazy near the date of composition, it was a reasonable assumption. However it also seems that Nikolaus Kraft, Anton’s son, supplied erroneous information to Gustav Schilling, who published in the 1837 Encyclopädie der gesammten musikalischen Wissenschaften the bold claim that the concerto was actually an early composition of Anton Kraft, submitted to Haydn for review and then inadvertently left among Haydn’s papers and published posthumously as the work of Haydn. We know now that this claim is clearly false and it surely would not have been made had Nikolaus Kraft or Schilling known in 1837 that Haydn’s manuscript still existed, that Haydn himself had inscribed the work into his catalog, or that it was not, in fact, published posthumously, but in 1804. (The André edition bore no date, but has been definitely dated by its plate numbers) It seems unlikely that Nikolaus Kraft, who was nine at the time Anton left Esterhazy and was trained as a cellist by his father, would not have known the true origins of the work. The false information he provided Schilling was likely a deliberate attempt to increase the legacy of his deceased father and their Kraft “brand.” Unfortunately, this great lie enmeshed itself to this concerto to such an extent that even to this day -in the face of overwhelming evidence to the contrary- many still imagine that there is some doubt as to its authenticity. Hopefully the newly revealed details of its commission and debut may finally put those rumors to rest.

My research into the origins of this concerto was inspired by concerts with the Houston Symphony. I am heavily indebted to Thomas Tolley whose groundbreaking research I am only surveying and whose paper should be read in its entirety for the rich level of background and detail it provides.

Jaap Van Zweden: I had Covid and I lost 30 kilos »