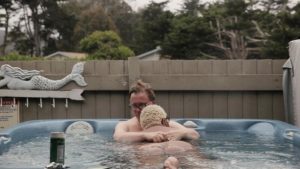 The British maestro will give his first Munich concert next week as chief condcutor designate in a programme reconstructed to his taste.

Among the additions is a work by Georg Friedrich Haas, an Austrian composer who has enjoyed great publicity for his unusual sexual proclivities.

‘In these challenging times, we all have to be light on our feet as programs need to change but still need to be satisfying and have some kind of line through them. The first program originally had Purcell, Adamek and Messiaen together: The funeral music led on to Adamek’s journey between life, death and other worlds, which in turn led to the resurrection explored in the Messiaen. Now the journey is different: Purcell’s dark 17th century masterpiece is the prelude to one of the earliest universally acknowledged masterpieces of the 21st century, Haas’s ‘in vain’, which always seems to me to be exploring the primeval music that could have come BEFORE the beginning of Rheingold. It is also unusual not only for exploring the natural harmonic series so thoroughly, but also for being played in part in total darkness, a challenge for all of us, but with a profoundly moving impact.

‘Winrich Hopp, Artistic Director of the musica viva, had the initial idea to commission the great Czech composer Ondrej Adamek to write a song cycle for my wife, Magdalena Kozena. Ondrej has come up with a work which explores psychological and spiritual journeys between different worlds, using many different types of folk music and wildly varying vocal techniques. It looks both thrilling and powerful, and we are all immensely curious to find out how it will actually sound! That we can do such programs on one day in two concert halls is a huge tribute to the possibilities of Munich, the BRSO and the always enterprising musica viva series.”

« Just in: Richard Jones to stage his second London Ring, jointly with the Met