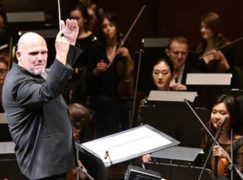 After a whole year’s absence, music director Jaap Van Zweden will fly to New York next month to film a concert with the New York Philharmonic for its new paid streaming channel, launched today. At least that’s the plan, Covid permitting.

The orchestra is charging $4.99 a month of $50 a year for access to new and archived concerts.

The New York Philharmonic announces NYPhil+, the Orchestra’s new on-demand streaming service, available today at nyphil.org/plus. For $4.99 per month or $50.00 per year, subscribers to the platform can access newly recorded programs and historic performances. The collection will also be available on apps for Apple, Android, Amazon Fire, Roku, and other major streaming platforms later this spring.