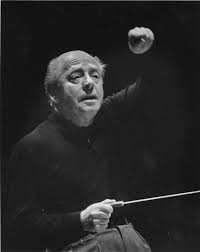 The conductor with the thickest skin

From the anti-maestro memoirs of the marvellous John Georgiadis, the LSO leader who sadly died yesterday.

After many hours of rehearsals and recordings through which he was constantly displaying his dissatisfaction with the LSO’s inaibility to do what he wanted, at last something happened that pleased him. With a satisfied roar he exclaimed, ‘Yes, yes, yes! Now, at last, you’re beginning to sound like my Philadelphia!’

A it would be the ultimate height of bad manners for a conductor to make any comparisons with another orchestra, for a moment the LSO members sat in quiet shock. Then, after that silent moment of stunned disbelief, there arose an enormous ground swell of noise as moans of utter derision greeted this incredible ‘clanger’. Boos and hisses accompanied the groand in a spontaneous rejection of these crude sentiments. But (Ormandy) just looked astnished and uttered, ‘what? what?’ a few times, simply not comprehending that he had crossed the line of decency.

This was the only time that I saw him taken aback, such was the thickness of his skin…

« Will concerts ever come back?