Our latest review of the centennial season from Christopher Morley:

We end with Haydn’s Symphony no.84, composed for the huge orchestra of the Concert de la Loge Olympique in Paris, an ensemble founded by Joseph Boulogne, Chevalier de St-Georges.

This immensely fascinating character was born on Guadeloupe, the son of a former French politician and a native West Indian woman. The family eventually settled in Paris, where Boulogne became an expert horseman, swimmer, dancer, skater and, especially, fencer.
He was hailed as the finest swordsman in Europe, and was indeed summoned to England to give exhibition fencing matches, including for the Prince of Wales at the Royal Pavilion in Brighton.

But above all this he was also a very fine violinist, composing many works for his instrument, including several sinfonie concertanti which may well have been the example for the greatest example of the genre, Mozart’s for Violin and Viola. Boulogne composed stage works as well, and this programme began with the Overture to his opera L’Amant Anonyme, premiered in Paris in March 1780.

Conductor Ben Gernon (an alumnus of Michael Seal’s CBSO Youth Orchestra conducting academy) introduced the piece charmingly, and it was delivered both alertly and intimately by the CBSO, but the fact remains that the music is something and nothing. Its chief virtue is the way it throws into relief how toweringly Mozart’s music rose above that of all of his contemporaries.

Though Haydn was a twin peak, and St-Georges was deeply involved in the commissioning and certainly performing in the premiere in Paris of his 84th Symphony. Composed for a large orchestra, its performance here on an extended Symphony Hall stage was socially-distanced (astute camera-work helped us scan around the orchestra as we used to a year ago), spirited, pointed and joyous under Gernon’s expressive hands, winds so eloquent in personality.

The strings had their own showcase in Britten’s Les Illuminations, settings of hallucinatory poems by Rimbaud, their response incisive and full of personality as they collaborated with soprano Mary Bevan. Bevan’s command of register was both magisterial and meltingly smooth as she slithered between the ranges, and her diction was of spitfire clarity.
Les Illuminations has long been one of the CBSO strings’ party-pieces, and indeed Louis Fremaux, the conductor who did so much to set the CBSO onto the world-class stature it now deserves, chose a performance with Britten’s partner Peter Pears as one of the highlights of his career with this resourceful orchestra.
Christopher Morley 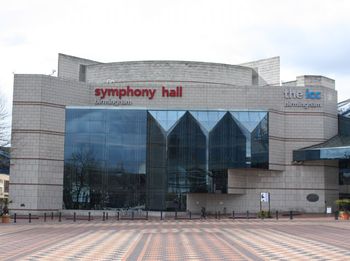