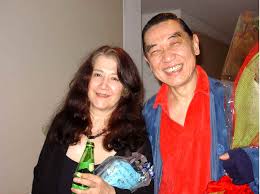 Martha Argerich: Fou Ts’ong opened new horizons for us all

Pianists are paying tribute to one of the instrument’s great pioneers:

Yuliana Avdeeva: I am filled with a deep sorrow as my mentor Fou Ts’ong is no more. It was a great privilege to know him and to absorb his creative spirit and boundless admiration for music. I feel so grateful for the inspiration, kindness and light he shared and will always keep it in my heart.

Daniel Vnukowski: I worked with Fou Ts’ong several times during my Lake Como years, where we had the advantage of being able to spend many dinners together in intimate conversation, in addition to masterclasses. While he was smoking away at his pipe, we always learned a great deal about his unique, poetic approach to music interpretation, the many incredible musicians he had collaborated with and about the unspeakable tragedy that beset his family as a result of Mao’s Cultural Revolution. His parents were targeted by the regime and eventually committed suicide; his father Fu Lei was a highly-respected translator of the works of Balzac into Chinese.

He always called me his “Polish brother”. He once told me that he would not have been alive if it wasn’t for the strong efforts of the music faculty at the Chopin Academy of Warsaw, especially Zbigniew Drzewiecki who helped him remain in Poland in the early 1950s. He later went on to win third prize at the Intl. Chopin Piano Competition and eventually settled in London, where he had lived and taught ever since.

The Fryderyk Chopin Institute: It was with great sadness that we learned of the death of the legendary Chinese pianist Fou Ts’ong. His departure brings to a close a crucial page in the Chopin tradition; we bid farewell to a master, musician and philosopher with a unique gift for conveying Chopin’s greatness to the world both in words and, above all, through his playing. A true wise man of the East, he taught us how to understand and feel the Mazovian mazurka. His interpretations and reflections were an inspiration to many, Martha Argerich included.
An artist who belonged to his country’s cultural elite, his life was marked both by dramatic events and by the tragedy of the generation of Chinese people that experienced the cultural revolution. He had a connection with Poland from an early age. Enamoured of Polish culture, he had many close Polish friends; suffice it to mention that he played his first concert with orchestra after fleeing to the West, in England, under the baton of his fellow exile and friend Andrzej Panufnik.
In a special album recorded to mark the artist’s sixtieth birthday, Martha Argerich, Leon Fleisher and Radu Lupu wrote: ‘Fou Ts’ong became one of the great teachers of our time. We are obliged to Fou Ts’ong for all his new ideas and for opening new musical horizons for all of us’.

Beverley Leung: Years ago in New York, after he played Chopin Ballade No.4 , I almost felt he was going to faint right there. He absorbed everyone of us, he absorbed the air, he gave all. No hesitation. The scene that I will never forget. I am still shocked.

William Youn: I remember that one evening at Lake Como when one of my colleagues started playing the 3rd sonata of Chopin, I watched Fou Ts’ong leaning on his chair lighting his pipe, thinking how this person portrays the music itself. He was an artist- the most sensible, unpredictable, he could laugh like a child and suddenly be transcendental like an old monk. You could feel his scar inside him, the pain he carried which he tried to heal everyday through music.

Jacqueline Leung: Thinking back to the way you played still pierces my heart. It was some of the most sincere piano playing I have ever heard. I still remember attending your 70th birthday concert at Wigmore Hall in London in 2004, in awe by the life, vigour and character you brought to Haydn, Scarlatti and Debussy. And how can I forget visiting your house (with 5 grand pianos!) every week for my piano lesson with Ms Patsy Toh, where I’d be warming up for my lesson with a particular Chopin etude on the ground floor and I’d hear you practising the same etude or Chopin Ballade on the top floor. Sometimes you would open the door for me, and I would almost be too nervous to talk to you.

Patrick Chong: Before Lang Lang, Yundi Li and Yuja Wang there was the original Chinese poet of the keyboard, Fou Ts’ong.

« More variations than the Kama Sutra