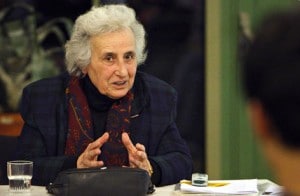 I wrote some weeks ago, under one of my other hats, urging last-ditch resistance to the Holocaust memorial that politicians of all shades and motives want to erect in Westminster, opposite the Houses of Parliament.

Now, a great voice of conscience has joined our opposition. The cellist Anita Lasker-Wallfisch, an Auschwitz survivor, has spoken out in an interview with the Observer architecture critic, Rowan Moore:

Lasker-Wallfisch questions the £100m cost – “an unbelievable amount of stupid money spent on what, exactly?” – in straitened times. The proposal will “overshadow a memorial on banning slavery”, a neighbouring Victorian tribute to the abolitionist Thomas Fowell Buxton. “It hasn’t been thought through… it’s counter-productive… Basically, if you want to promote antisemitism, this would be the thing to do,” she says.