Now you can hear Mahler’s version of Beethoven’s 9th

An Austrian conductor, Johannes Vogel, has pulled together an orchestra in a Vienna studio to perform Gustav Mahler’s re-orchestration of Beethoven’s 9th Symphony, an adaptation that aroused uproar in February 1900 and led to the Vienna Philharmonic replacing Mahler with a ballet maestro as their chief conductor.

All Mahler did was ‘retuschen’ – tweaks of the instrumentation to project an orchestra of the 20th century rather than the 19th, but the Viennese were looking for any excuse to hound him as a heretic.

There have been previous recordings of Mahler’s version by, among others, Vasily Petrenko, Neeme Järvi and Leonard Slatkin.

Vogel’s performance is intended as a closing event for the Beethoven year, which is also the Covid year. 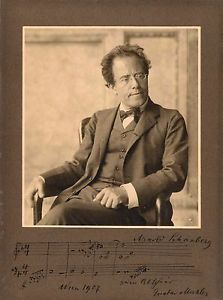