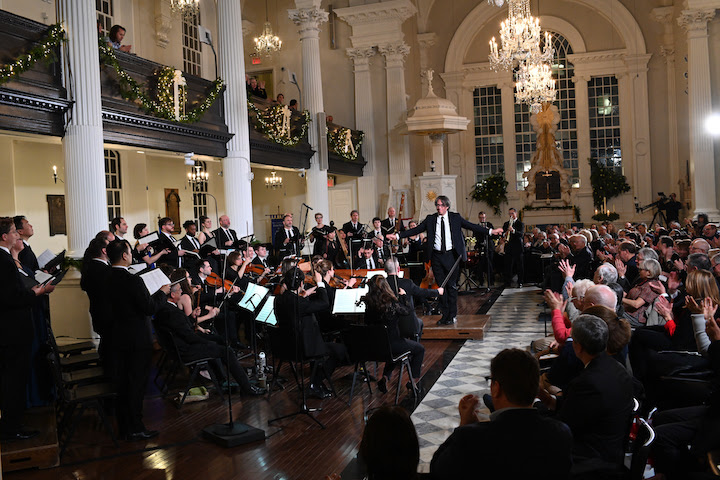 Trinity Church Wall Street hosted one of the earliest American performances of Handel’s Messiah in 1770.

Now, for the 250th anniversary, it’s giving the Facebook premiere.

This season, when the pandemic has made most live performance impossible, Trinity keeps the tradition alive with a special interactive Facebook Premiere at 3pm on December 13, when viewers can tune in to see a complete concert performance of the work, captured live last year in high definition, by the Grammy-nominated Choir of Trinity Wall Street, Trinity Baroque Orchestra and Music Director Julian Wachner. The oratorio’s movements will be interspersed with personal video messages from ten key Trinity artists, and there will be a live comment thread for audience members to chat with Wachner, the musicians and other viewers around the world. Representing the culmination of Trinity’s “Messiah Week” – five days of related webcasts in the daily “Comfort at One” series – the Facebook Premiere invites music-lovers everywhere to come together at the end of this difficult year to take solace in Handel’s enduring and uplifting work.

Trinity was instrumental in pioneering the Messiah in the Americas, hosting one of the first American performances in 1770. As Baroque specialists whose vocal soloists are drawn from the choir and whose instrumentalists are expert performers on historical instruments, Wachner, The Choir of Trinity Wall Street and the Trinity Baroque Orchestra now rank among the foremost exponents of the perennial holiday favorite. Their authentic approach “demonstrate[s] why historically informed performance makes a difference,” notes the Wall Street Journal. As the New York Times observes: “With the church’s choir and the Trinity Baroque Orchestra, a period band, Mr. Wachner provides gritty, gutsy, edge-of-the-seat performances.”

By way of an upbeat to the main event, “Messiah Week” provides opportunities to revisit highlights of some of Trinity’s other past performances of the oratorio. Viewers can stream a series of solos from baritone Thomas McCargar from 2018 (Dec 8), bass Jonathan Woody’s account of “He was despised” from the same year (Dec 10), and a number of the work’s most rousing choral movements: “For unto us a child is born” from 2017 (Dec 7), “And he shall purify” from 2018 (Dec 9), and “Surely,” “And with His stripes” and “All we like sheep” from the 2016 performance.

« Another violinist switches bow for baton