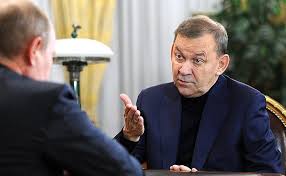 The Bolshoi now has 124 Covid cases

Vladimir Vladimirovich, many of our colleagues today in the West do not work at all. Suppose the Metropolitan Opera is going to open its season only in the fall of 2021. A number of theaters are closed. And the fact that today we have been given the opportunity to work is wonderful despite all the difficulties.

My morning began with a report that 124 people are ill in the theater today, that is, more than three percent of those working at the Bolshoi Theater. This is a large number of people, and people of different professions: artists, technical workshops, and so on. Despite this, for all the time since the beginning of the season, and we opened on September 5, we canceled only one performance due to the artist’s illness. All other performances took place, and took place when the auditorium was 50 percent full.

Moreover, recently the great Placido Domingo, together with his friends and colleagues, gave a brilliant concert here. I know that then many of the participants in this concert were with Valery Abisalovich Gergiev and gave a concert there. It was an amazing experience. In this case, I’m not talking about the Bolshoi Theater, I’m talking about the fact that, in spite of everything, we continue to work.

At the same time, we must, of course, understand, and I would like to move from some kind of reporting to the problems that, as it seems to me, arise in this connection. Obviously, from my point of view, we must understand that the theater economy is often made up of approximately different amounts: on the one hand, this is very significant state support, and on the other hand, it is the money we earn.

Not only is it 50 percent full today, I do not call for increasing this percentage, it seems to me that today, in the current situation, this is not necessary. But we must understand that, naturally, we also earn much less. Moreover, we must understand that, and this is obvious, even in a theater like the Bolshoi, we have felt a certain decline in the audience: people are afraid to go to the theater.

There is no acuteness of the problem, but such a danger still exists. And then we came up with and reduced the price of tickets. And they did it not formally, but made it a program. The Bolshoi Theater has a program called “Bolshoi – Young”, when we sell tickets to those who are between 18 and 25, and sell them five to six times cheaper than we sell to everyone else. We brought young people into our auditorium. They filled the auditorium, given that even more so today those over 65 rarely come to the theater.

Realizing that today theaters are losing, very seriously losing part of their earnings, of course, it is necessary to think over measures. And in this case, I mean, of course, targeted support, understanding the situation, and so on, especially since we understand, most likely, we will live in such conditions for at least most of 2021. That such targeted support will be needed – of course. It is clear that in the Bolshoi Theater, the state part of the budget is about 60 percent and about 40 is what the theater earns. But I’m not talking about the Bolshoi Theater, a huge number of theaters that have a fairly significant part of their earnings, and these are people’s salaries, these are new productions, and so on. I partially think about these shortfalls in income in the future, I understand everything perfectly, I know that today such requests are heard from all absolutely spheres of state activity.

As concerts dry up, a pianist has to sell his Steinway »